We all have our guilty pleasure. It is not enough that I have a library outfitted with dark oak shelves and wainscoting, a bay window that looks across a pasture to an enchanted forest, and a comfy chair in the corner near the fireplace, the mantle of which is lined with tobacco canisters.

I look up and down the hallway before closing the door, then go to my desk, pull open the lower drawer and reach for my guilty pleasure. Then I settle in to my comfy chair and flick the toggle. My Kindle comes to life.

Thalia, who hugs her book of Grimm tales, would be scandalized if she knew I had a Kindle. I rationalize that it is easy to hold, the type can be made larger for tired old eyes, and turning the page is done with a twitch of the thumb. I know it is not a real book, but I fancy I am reading the spirit of a book. Besides, this is where my copy of Odds and Sods resides, a ribald read if ever there was one.

I am rereading one of the tales from this English translation of Danish folk stories, The Princess Who Became a Man.

A king has lost his wife and cannot find another suitable until he realizes his daughter looks exactly like her. Appalled by her father’s demand that she marry him, she runs away, but is pursued by the king’s two bloodhounds. The princess cuts off her breasts and throws them to the dogs. The hounds eat the breasts and return to their master.

Staunching her wounds with moss, she finds shelter in the cottage of an old man. He takes care of her and, when she is well, he teaches her how to hunt. There comes a day when the old man suggests she leave the safety of the woods and seek the job of a gamekeeper at a royal palace not far away. If ever she is in trouble, she is to think of him.

Dressed in men’s clothing, she is soon not only the gamekeeper, but a dear friend of the princess. They wish to marry and it is granted. But on the wedding night, the Red Knight—stock villain of the Danish tales—hides himself under the bed and learns their secret. The Red Knight reveals the secret to the king, who declares a mandatory day of bathing in the river.

Then the old man takes the dead child away and returns with a covered dish for the gamekeeper’s wife. When the gamekeeper gets home and his wife lifts the lid, there  is the child, whole and well.

I am as perplexed by the tale as I was the first time I read it, but now there is a note to the tale I know was not there before.

“Meet me in Miss Cox’s garden at noon. Stephen.” And the Kindle turns itself off.

Fairy Tale of the Month: September 2013 The Princess Who Became a Man – Part Two

Sitting down on the wrought-iron bench in the garden, I see before me familiar tulip glasses filled, I am sure, with Rǿd Aalborg Akvavit. Miss Cox provided this treat the time I met Evald Tang Kristensen. The drinks are appropriate for my meeting with Stephen Badman, Kristensen’s present-day translator.

Stephen appears at the gate, leaning heavily on a cane. Before needing a cane he got around a fair bit, teaching English in Denmark and Papua New Guinea. His acting credentials came to the fore when he co-founded Gwent Theatre and directed the Gwent Young People’s Theatre in Abergavenny, Wales. Stephen looks dubiously at the two glasses of Akvavit as he stands over them.

“I lost my legs on that stuff one time, you know, and I hardly have legs to stand on now.”

Nonetheless, he sits and we knock back the two shots.

“What can you tell me about The Princess Who Became a Man?” I am anxious to know.

“Not as much as you would like. Kristensen collected it from an old woman, likely a widow, named Ane Kristine Olesdatter.

“Incest taboo aside (and I’ve yet to resolve who the `old man` is) the princess divests herself of her femininity/womanhood by removing her breasts; she is trained in a very masculine trade (gamekeeper), against all custom is allowed to marry the princess, and only then confesses her sex, by which time love has conquered all.

“The treachery of the Red Knight is a give; his betrayal is necessary for the final trial and test of faith—rather like Judas, without his intervention there would be no death and resurrection.

“The chopping of the first born as a test of one’s faith is a common motif  (shades of Abraham) and once passed, there is reward. Be true to oneself at all times and you will be rewarded—a Christian message? The more you suffer, the greater the reward? Is there a Sapphic element to the story? Is this a plea for tolerance?

“The story is a minefield of possibilities. People take from it what they will. Although not religious myself, I tend to think that there is a Christian message hidden deep within the symbolism, But there again ….”

“What of the old man?” I press him. “He is ever-present in the story. I have begun to think of him as the protagonist’s super-ego. Not that Ane Olesdatter knew anything about Freud and his theories, but might she have thought of the old man as a personification of moral thinking?”

“I always come back to the chopping of the child.” Stephen rests his chin on the top of his cane. “On the first cut,  the old man talks of his pain when her father desired to take her to wife; his desires are against the natural order. The sin is against both man and God; he takes away the girl’s innocence.

“The second cut, the removal of her breasts, which are fed to the dogs, compounds the first `sin.’ The old man was pained that she needed to mutilate herself before the hunt is called off and she is abandoned by her father. The pain the old man feels is as much about the king’s failure as about the dreadful solution she finds to her problem. She is tested to the limit and passes.

“The third cut (all good things come in threes) is all about the fulfillment of her promise to the old man; however painful her part of the bargain, she sees it through. The story is about balance; like Job the girl is rewarded. She gets to marry a princess and in the fullness of time will become the tried and tested king.

“As to who the old man is—The Righter of Wrongs, The Shield against the Storm, the protagonist’s Super-ego; I don’t know—there’s a bit of the Old and New Testament about him. He certainly gives us food for thought and discussion.”

Our eyes fall on the tulip glasses at the same time. They have refilled themselves. Stephen and I exchange glances and raised eyebrows, but pass on the delights in front of us. We do want to be able to walk out of the garden.

Fairy Tale of the Month: September 2013 The Princess Who Became a Man – Part Three 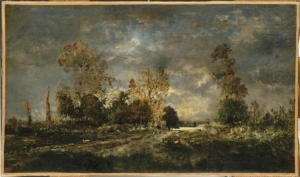 The enchanted forest has a reputation for being a quiet place, unnaturally quiet. I enjoy my walks there, although I never go too far into its darkness. I do not enter armed with a sword and shield, filled with courage as might a knight, but rather with my hat, cane, and pipe; my pipe filled with tobacco and my mind filled with thoughts. On my walk this evening The Princess Who Became a Man rolls around in my head.

Pieces of the story are familiar to me. As shocking as the king wanting to marry his daughter will always be, it is not new to this tale. Catskins, as an example, comes to my mind.

Magical helpers—in this case the old man—have a well-defined place in the fairy-tale cycles. The little old man or woman by the side of the road, or in the wood, who asks the young man to share some of their food, then rewards the generous with a cloak of invisibility, or a money purse that never empties, or a table cloth that presents a feast. These trinkets are usually reserved for male heroes. Often the magical helper would give female heroines shelter.

The Red Knight is familiar to Danish audiences, and here serves his usual purpose of sowing discord.

Familiar too is the giving up of the first born. Famously, Rumplestiltskin serves as an example.

Within that familiar frame are elements I have not encountered in fairy tales before until I came to The Princess Who Became a Man. I refer to, of course, the heroine becoming a hero. I know of no other variants of this motif.

Appalled by her father’s advances, she throws away her sex, feeding it to the dogs, in an effort to preserve her being.

With the help of the old man, she takes her first superficial steps toward assuming a new sex. Leaving the safety of the woods and the old man’s home, she relaunches into the world where she finds true love—for a person, who returns the love to her as a person, regardless of sex.

Their little utopia is immediately threatened by a malignant force. Before she, as the gamekeeper, must stand naked, with all her shortcomings, the magical helper intercedes, completing the last step to her becoming male, but he exacts a price.

A magical helper exacting a price is highly unusual, but is a device in this story as a setup for the last ordeal. The heroine, now a hero, must relive the horrors experienced through a ritualistic slaying of his offspring. Not until then can wholeness be achieved.

Questions of sexuality threaten to define this story, but as I wander through the enchanted forest, its odd atmosphere clarifies my thoughts, as it always does.

This is more than a story about a question of gender. The story uses that question to illustrate an overarching theme. The importance here is that the travail encompasses a painful transition. As Stephen suggested, it comes back to the dismemberment of the child. Had the story ended with the heroine completing her transition into a man, it would not have finished delivering its larger message. By reenacting the story through cutting the child in two—in graphic and immediate terms—we see clearly that a painful ordeal is nothing less than a death and rebirth.

The sun is setting and the enchanted forest grows dark. I best be out of this bower before I lose my way. I should not dwell here too long, not let the forest claim me, but allow me to return to the comforts of my home.