Mermaid in the Pool with Goldfish, Franz Hein

A perfect day is rowing on that piece of the Thames which flows through Oxford, while listening to a story.

As a gentle September sun shines down on us, Melissa and Thalia sit in the bow of the boat, Melissa reading from her book as Thalia leans against her shoulder, silently reading along.

Melissa endeavors to broaden Thalia’s horizons beyond the Brothers Grimm and treats her to a story from Joseph Jacobs’ Celtic Fairy Tales.

“There was once a poor old fisherman, and one year he was not getting much fish,” Melissa begins. It is from the tale The Sea Maiden.

The fisherman bargains with the Sea Maiden, promising his unborn son, when that son reaches the age of twenty, in exchange for continuous good fishing.

At this point, the story tells us nothing about this son, other than he is twenty when he finds out his father has promised him to the Sea Maiden. The father reneges on his promise, and at his son’s request, asks the smithy to make a sword. The son tests and shatters the first two. Not until the third sword is the weapon to his liking. With the sword and his father’s black horse, he ventures out into the world.

Beside the road is a black dog, an otter, and a falcon, arguing over the carcass of a sheep. After the young man divides the spoils for them, they each pledge their help to him when needed.

The lad becomes a king’s cowherd, and grazes the cows on the lands of two giants. Both giants and their mother, in succession, attack the cowherd. The lad defeats them all with the help of the black dog, acquiring these villains’ wealth and possessions, but tells no one of it.

On his return to the castle, he hears that the princess is to be sacrificed to the three-headed monster of the loch. Her salvation may be a great general who wishes to marry her and is willing to defend her against the beast.

The next morning, the general and the princess go to the loch, but when the monster appears, the general loses courage and hides. The youth, in full armor, on his black horse with the black dog, shows up to battle the creature, cutting off one of its heads. He ties a knot through the head, and gives the head to the princess. She gives him a piece of her jewelry and he departs. As the princess drags the head back to the castle, the general steps up, forcing her to say it was he who cut off the monster’s head. Events occur in the same way for three days until the beast runs out of heads.

After the herdsman and the princess are married, the Sea Maiden emerges from the loch and pulls away the young man. On the advice of a soothsayer, the princess plays her harp by the shore, attracting the Sea Maiden. The princess refuses to play more until she can see her husband.

The Sea Maiden raises him above the water, and he calls for the falcon, which carries him off. However, the Sea Maiden now grabs the princess. The same soothsayer as before tells the youth how to find the heart of the Sea Maiden, which is in an egg, inside a trout, inside a hooded crow, inside a white-footed hind. The black dog runs down the hind, the falcon catches the hooded crow, and the otter takes care of the trout, which gives up the egg.

The Sea Maiden rises up and pleads for her life. The youth demands the return of his wife. When she is in his arms, he brings his foot down on the egg.

“My goodness,” I say, “that’s a long story,” and realize I’ve rowed past our picnic spot.

After a bit of backtracking, we lay out our picnic from Melissa’s rattan basket under an ancient oak. She first produces a bottle of merlot. We allow Thalia a sip from her glass. She screws up her face and looks at us adults with dubious wonder. I don’t feel that way about the glass Melissa has poured for me.

Melissa nods. “I think the old shanachies were good at taking stories they heard and folding them into one.”

Thalia taste tests the cranberry Stilton Melissa is cutting. “I like the part about the heart in the egg,” she says.

“How many motifs from other stories are crammed into this one?” My sights are on a bit of hard salami that sits beside the Stilton.

“Well,” Melissa muses, “the tale starts with a fisherman trading his son for good fishing, that is to say for wealth. I first ran across that theme in Child of the Sea, in Modern Greek Folktales, by Dawkins, I believe. Did that travel from Greece to Ireland or from Ireland to Greece?”

“Maybe from somewhere else to both,” I put in. “Then we have the sword thing, his shattering of the blades before finding a good sword.”

“Well,” says Melissa, “that is right out of Sigurd.”

“A Norse legend. I must read some of that to you one of these days.” Melissa smiles.

“Next,” Thalia pronounces, “came the dog, otter, and falcon, like in the White Snake with the fish, ants, and ravens. I like ravens.”

“The animal helpers,” says Melissa as she pulls from the endless rattan basket a curry pasta salad, evoking in me a Pavlovian response.

“What is our fascination with animal helpers?” I say, helping myself to the salad. “They are everywhere in the fairy tales.”

“It breaks a real-world barrier.” Melissa’s eyes move skyward as she formulates her thought. “Isn’t that the stuff of fairy tales? To move us beyond the mundane?”

“Next came the giants.” Thalia is buttering a piece of Marco Polo bread.

“That,” I say, “has its parallel in another Irish story, Jeremy Curtin’s Shee an Gannon and the Gruagach Gaire.”

“The what rabbit?” Thalia asks.

“Let’s move on to the next motif,” I suggest, “which is the classic princess in distress.”

I see Melissa go into her “yes, but” mode. “Yes, but, you brought up Shee an Gannon and the Gruagach Gaire in which the princess is not in danger, but, as in the Sea Maiden, the hero decapitates a number of giants, and (in this case) takes their tongues, leaving the heads for the interloper to claim. Then, at the wedding between the interloper and the princess, the hero appears, knocking off the head of his rival, even before making his claim on the princess.”

“Reeeeed me that story!” Thalia squeals.

Melissa looks embarrassed for a moment. “Maybe next time,” she deflects, as she reaches into the basket for some cold shrimp and cocktail sauce. She glances worriedly at me. “Am I being a bad influence?” 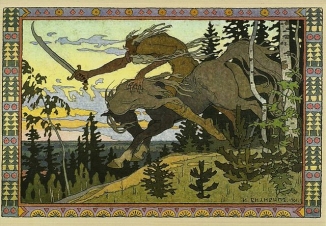 Koshchey the Deathless by Ivan Bilibin

Having sated myself on the repast Melissa provided in glorious fashion, I settle back to digest a bit, lighting my pipe, Melissa and Thalia still nibbling on the brownies.

“Where were we?” says Melissa. “Ah, yes, we are up to the Sea Maiden reappearing to claim the youth.” Thalia wanders over to the river edge to poke at the minnows with a stick. “Don’t get snatched away by a mermaid,” Melissa calls to her.

“I am thinking again of The Child of the Sea,” continues Melissa. “Almost the exact thing happens. In that story the hero is carried down to the sea to have his wounds washed after battle and is reclaimed by the Queen of the Sea. His wife then tempts her with a golden ball to show the husband above the surface of the water, who then turns himself into an eagle. But that is pretty much where the story ends.”

Beneath my recollection of that story is a thought struggling to surface. “Now I remember! In Folk and Fairy Tales of Demark there is a version of this called something like Kidnapped by a Mermaid and a Dragon.”

I draw on my pipe and that somehow helps my memory. “It starts out the same way with a fisherman trading his son to a mermaid. Trying to escape his fate, the youth comes across the animal helpers and divides a carcass for them, only this time there are four helpers: a lion, a dog, a falcon, and a beetle.”

“A beetle? Interesting,” nods Melissa. “In The Child of the Sea it was an ant.”

I pick up the thread of my thought, “The animals give him the gift to turn into those creatures.

“Then there is a king who has three daughters, from whom the hero must choose the right one in order to save his life and marry her.”

“Nope, that part is different, although I know the motif from elsewhere.”

“The two lovers already know each other, “I continue, “from when he visited her in the form of a falcon, much like in The Earl of Mars Daughter.”

“Then the hero is kidnapped by the mermaid.”

“When the princess saves the youth from the mermaid, she in turn is kidnapped by a dragon.”

“Nope.” Melissa sighs. “Does the hero defeat the dragon by finding his hidden heart?”

“These motifs are like a deck of cards being shuffled and dealt out. Every hand is a different story,” Melissa observes.

“I think I have lost count of the number of motifs in The Sea Maiden.” I relight my pipe.

“Well, we still have not said much about the hidden heart.”

As Melissa says this, Thalia rejoins us.

As I puff on my pipe, I recall something else. (I wonder if tobacco is a memory jog.) “I ran into that theme recently, and not for the first time, in a reference to Koschei The Deathless, the Slavic villain, whose soul is in a needle, which is in an egg, in a duck, in a hare, locked up in an iron chest, buried under a green oak tree on the island of Buyan, wherever that is.”

“The subtle suggestion,” Melissa concludes, “is that only evil people try to live forever by separating their soul or their heart from their bodies.”

“Does your nixie do that?” Thalia asks me.

“Oh, I hope not.” I say absent-mindedly.

Melissa is staring at me. “YOUR nixie?”