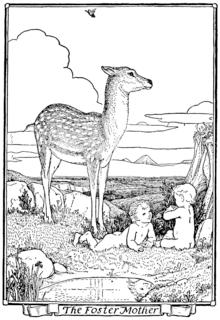 I have always thought of the cobblestone street—along with the old-fashioned storefront window and its bold black letters spelling “Serious Books,” and the smaller lettering denoting “Melissa Serious, Proprietor,”—as being perfectly picturesque.

Thalia and I pay the store a visit as part of our Saturday ramble.

“Ah,” says Melissa as we enter the shop. “The very customer I am looking for. I have your next purchase.”

Of course she does.

“What titles do you think of when I say the name of your old friend Joseph Jacobs?”

She hands me the book she holds.

“Really? I somehow missed this one.”

“Published shortly after his death, I believe, it is mostly variants of stories the Grimms collected, although there is one that really stands out for me. The Dancing Water, the Singing Apple, and the Speaking Bird.”

Melissa glances around her store, otherwise empty of customers, and settles down on the reading sofa with Thalia at her side.

Once a king, with the peculiar habit of listening at people’s doors to hear what they thought of him, put his ear to the door of three sisters as they sat spinning. The first said, if she could marry the king’s butler, she would give the whole court a drink of water from a glass and have some left over.

The second said, if she could marry the king’s keeper of the wardrobe, she would clothe all the attendants from one piece of cloth and have some left over.

The youngest of the sisters said, if she could marry the king, she would bear him a son with the sun on his forehead and a daughter with the moon on hers.

The next day the king invites them to the castle to prove their claims, which the first two sisters miraculously do and get their husbands. The king marries the youngest under the condition she must bear the promised children or die.

The first two sisters become jealous of their younger sister. When the king goes off to war, and the promised children are born soon after, the sisters bribe the nurse to substitute two puppies. The nurse takes the children out to the wilderness to die and the king sends a message that his queen is to be placed in a treadmill to work until she dies.

Three fairies discover the babes and give them a deer to nurse and raise them, a purse that never empties of money, and a ring that will turn dark if one of them is in trouble.

When grown, the children are told by the fairies and the deer to move into the castle next to the king’s. The two sisters see the boy and girl with the sun and moon on their foreheads and know they are in trouble. They send the nurse to visit the girl to tell her that, if her brother truly loves her, he will get her the Dancing Water.

The castle is guarded by four giants, but the lad must not try to get past them if their eyes are closed, but rather when their eyes are open. Beyond them is a door he must not enter if the door is open, but wait until it is closed. Then there will be four lions, and again, their eyes must be open if he is to pass by.

The hermits warn the lad not to talk to the bird, but take one of its feathers, dip it in a nearby jar of water and anoint the statues in the garden. Unfortunately, the bird tells the lad the treadmill will soon claim his mother’s life. To this he exclaims in surprise to the bird and he turns into a stone statue.

His sister sees the ring, given to them by the fairies, turn dark. She disguises herself as a page and sets out to find her brother. She, too, encounters the hermits, who instruct her. She succeeds in reclaiming her brother and anointing the other statues, who return to their human form of princes and barons. Even the lions and giants are released, the hermits return to being the three fairies, and the magic castle dissolves.

The king finally returns from his war to see the boy and girl and begins to suspect they are his children. The bird invites the king to visit them and on a return visit to the king’s castle, the bird tells the king the full story.

The nurse is thrown out the window to her death and the sisters dropped into boiling oil. The king begs forgiveness from his wife and brings her back to the castle. The bird flies off and all live happily ever after.

Fairy Tale of the Month: April 2019 The Dancing Water, The Singing Apple, And The Speaking Bird – Part Two 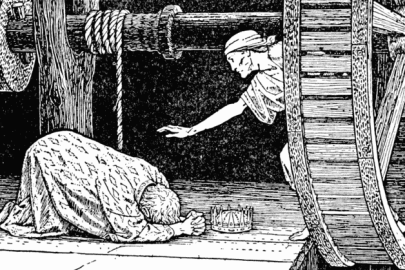 “And where does your Saturday ramble take you today?” Melissa asks, as she rings up my book.

“I am afraid it is still a toss-up; either Battersea Park’s Children’s Zoo or St. Jame’s Park to see the feeding of the pelicans.”

“Oh, bother,” sighs Melissa. You are my only customers all morning and now it’s past noon. If you go to St. Jame’s, I’ll close up shop and go with you.”

We head for the eastern end of the lake near Downing Street. Pelicans are gathering like groupies in anticipation of the attendant and his fish.

“What do you make of the eavesdropping king?” Melissa smiles at me.

“I hope that is not one of his better qualities.” I return her smile. “The king does serve as the inciting event, then disappears from the story until he reappears for the conclusion. The body of the story occurs between his appearances.”

Melissa nods in agreement then frowns. “Do the three spinning sisters bring to your mind the Fates?”

“Not for very long. Their destinies move quickly out of their own hands. However, the first two sisters do have the abilities to stretch water and cloth, and the younger to predict a somewhat miraculous birth.”

“Yes, the children,” says Melissa. “The motif of the king going off to war before his wife gives birth and the substitution of the puppies. I have come across it a number of times, as odd as it is. It’s the sun and moon stigmata that I don’t recall seeing before.”

Somewhere in my memory I think I have.

Thalia giggles as the attendant flings fish at the pelicans, which scramble to capture and gobble them down in their bag-like beaks.

“And fairies!” she chimes in. I didn’t think she was listening to us.

“True,” says Melissa, “it is something of a rarity to have fairies in a fairy tale.”

“Their role,” I analyze, “is as magical helpers, be they in fairy form or as hermits.”

“Then we have the quests for the Dancing Water, Singing Apple, and Speaking Bird, part of the repetitive  three,” Melissa observes.

“Dancing, singing, and speaking are all communitive,” Melissa reflects, “giving the three gifts a theme of their own.”

When the fish-feeding ends, we wander along the lake toward Buckingham Palace. To Thalia’s delight, one of the pelicans decides to join us, pacing beside me, trying to nibble the end of my umbrella that I carry “just in case.”

“The speaking bird has a special role,” I say.

“Yes,” Melissa fills in, “at first it is a threat. It tricks the lad into speaking, turning him into a statue, just what the two sisters hoped for.”

“But then,” I pick up the thought, “when the girl succeeds in breaking the spell—a spell we didn’t know existed until she broke it—the bird becomes a magical helper.”

“And,” Melissa concludes, “after it tells the king the whole story, it flies away.”

I poke at the pelican to ward it off, but that only encourages him to attack the umbrella even more, eliciting more giggles from Thalia.

Melissa frowns again. “Is our disassembling the tale, helping us to understand it?”

“A little,” I say, “although, disassembling doesn’t sound constructive.”

“Perhaps,” Melissa suggests with a twinkle in her eye, “a visit with Mr. Joseph Jacobs may be in order.”

Ah, today is turning into quite a ramble.

Fairy Tale of the Month: April 2019 The Dancing Water, The Singing Apple, And The Speaking Bird – Part Three 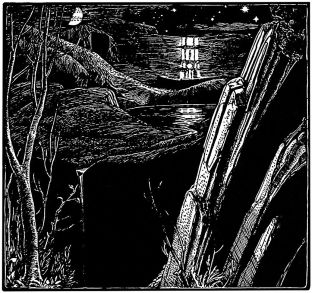 When our pelican became distracted by a brighter-colored umbrella, we quicken our pace and got away. Now we make for the blind alley at the end of which—for us—stands the gate to Miss Cox’s garden.

To our surprise, Mr. Jacobs is already sitting on the bench sampling the scones that Miss Cox has so kindly provided for our afternoon tea.

“We meet again!” he calls out with a smile. Melissa pours some tea for us, while Thalia grabs two scones, slathering one with clotted cream and jam, then dashing off to the pond to feed the other scone to the swans.

“I,” Melissa says, getting to the point after we settle down with our cups of tea, “have questions about the Dancing Water, the Singing Apple, and the Speaking Bird.”

“I think it is the longest title in the book,” Joseph chuckles. “I drew my version from Thomas Crane’s translation of an Italian work, originally a Sicilian fairy tale.

“However, like most fairy tales, it is well-traveled. The earliest written version is by Straparola around 1550. His work records a number of fairy tales for the first time. Our tale he called Ancilotto, King of Provino.

“The tale also appears in the Arabian Nights, the 756th night to be exact, and in the Brothers Grimm.”

“They called it The Three Little Birds. The story had changed by the time the Grimms found it. The three sisters are herding cows. The queen’s three children are born one at a time; two boys and a girl. Each time the evil sisters replace it with a dog or a cat. The eldest boy has a star on his forehead.”

That’s where I remember the forehead stigmata from. I read that story eons ago and it’s one of the few I have not read to Thalia.

I look down toward the pond. Thalia and the swans are getting along famously.

“In the Grimm version,” Joseph continues, “the Dancing Water, Singing Apple, and Speaking Bird have morphed. The Singing Apple is gone, the Dancing Water no longer dances and is used to restore their mother to health. The bird is in a cage, but nonetheless sings the story of the children to the king.

“Gone too are the giants, lions, and statues, but a magic wand and a black dog that turns into a prince for the girl to marry, are added; a bit of a muddle in my opinion.”

“I am curious about the sun and moon on the children’s foreheads,” Melissa says, taking a sip of tea.

Melissa glances at him sharply.

“Let me say,” he defends himself, “we editors are storytellers too. In Crane’s translation, which I followed closely except for this detail, the queen has triplets, two boys with apples in their hands, and a girl with a star on her forehead.

“In my view, the apples in hand served no purpose in the rest of the story, and one brother did nothing but be the second one to get turned into a statue. I dropped the useless brother, and drew from the research I had done for my Indian Fairy Tales, that is fairy tales from India, where the sun and moon markings are a known story element.”

“I thought it a little foreign.” Melissa’s curiosity is satisfied.

Indian Fairy Tales? Did I miss that one too?

I see Melissa writing a note to herself. I know what my next purchase will be.