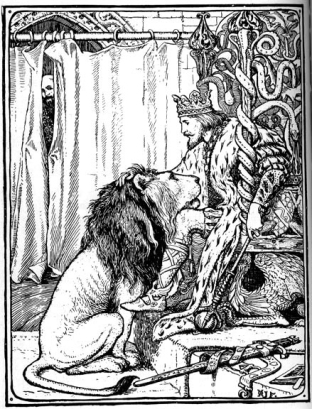 Thalia’s approach to the study tonight involves a lot more clatter than usual. She emerges through the pocket doors of the study toting her wagon behind her, its cargo being Teddy and a doll’s rocking chair, atop of which perches the fairy, her spider web-fine, black hair floating behind her.

Thalia draws her burden up beside my comfy chair. “I promised to read to the fairy—properly.” She sets the doll chair in front of me and settles Teddy into it. The fairy flutters into Teddy’s lap and sits cross-legged, as Thalia climbs into mine.

“Hmmm,” she studies the contents page of her Grimm. “This one,” and she commences reading. Thalia has chosen The Twelve Huntsmen.

A young prince, finding the woman he loves—appropriately a princess—has betrothed himself to her, but he is then called home, as his father is dying. Before leaving, he gives to her a ring.

Thalia stumbles over “betrothed,” but she gets it. I am proud.

The king, on his deathbed, extracts the promise from his son to marry another princess. The prince, out of respect for his father, puts the woman he loves aside.

She nearly dies of grief, but then asks her father to find eleven women who look much like herself, then they all dress like huntsmen, and offer their services to the faithless king.

The young king, not recognizing her in the disguise, takes them into his service, and becomes quite fond of them. However, the king has an extraordinary lion, who tells him the huntsmen are women, and devises a test to prove it.

The lion has peas spread on the floor of the antechamber, knowing men will crush the peas beneath their boots, while women will not. The princess hears of this test and schools her ladies to walk like men.

“Antechamber” slows Thalia down, but she gets that one too.

Next the lion has spinning wheels brought into the antechamber, which he thought would attract the attention of the women. Again, the princess tells her ladies not to look at the wheels, thus avoiding detection.

One day, word arrives that the king’s new bride will soon arrive. Upon this news, the real bride swoons. Alarmed, the king runs to help his favorite huntsman. When he takes off the huntsman’s glove, he sees the ring he gave to her.

Here Thalia adds a little drama to her voice as she reads the king’s declaration, “You are mine, and I am yours. No one in the world can ever change that.”

The king reaffirms his love for her, sends word to the second bride to return to her father, and marries his true love, exclaiming, “Whoever finds his old key does not need a new one.”

When Thalia is done reading, she crawls from my lap, puts Teddy and the doll chair back on the wagon, and with the fairy now sitting on the crown of Thalia’s head, the circus trundles out of the study, leaving me to contemplate the small shifts in history that make up our lives.

“Yes, my newest blend.” Augustus opens the canister to give me a sample. The familiar odors of his shop float about in the air.

“How coincidental; this is the story Thalia read last night.”

“Thalia read to you?”

“Odd little story, really.” I stuff my pipe with the sampling.

“Well, it’s got a lot of the usual tropes, the forsaken bride to start.”

“Aarne-Thompson’s The Forgotten Fiancée is its category,” Augustus chimes in.

“Exactly, but in this story the prince does not forget his bride due to a magical spell cast upon him, rather he puts her aside at his father’s request. The prince in this story is not blameless. The tale becomes about which promise he will keep, breaking the other.”

“Good point,” returns Augustus. “Notice that it is the man who forgets or forsakes the bride and not the other way around.”

“Are weak-willed suitors a given?”

“Perhaps. We need to consider that the Grimms were part of the German Romantic Movement, and wanted to appeal to bourgeois readers.

“The prince in our story could well have been perceived by the Grimms’ audience as a romantic hero, ultimately choosing his first love (passion) over his second bride (social convention). In our more egalitarian times, we see the prince as a flawed character, damned if he does, and damned if he doesn’t, having made conflicting promises. ‘Well, he should have known better, shouldn’t he have?’ we say.”

“Dear me,” I protest, “I hate to think we are no longer romantic.”

“Ah, my dear friend, you are delusional. We are in a much more self-serving time than that of Jacob and Wilhelm’s. They reached for an ideal, we for a reasonable alternative.”

“No, no, Augustus, I will stick to my romantic notions, despite what evidence you can produce.”

“More power to you, but what of the princess’s deception, hiding in disguise among eleven other copies of herself?”

“The Twelve Dancing Princesses comes to mind.” My pipe has gone out, but I do not light it again.

“Yes,” contemplates Augustus, “but only because of the number twelve; there is little similarity. I am thinking of The Quest for the Fair One of the World, from Modern Greek Folktales, by Dawkins, where the prince has to pick out the princess hidden among forty other look-a-likes. It’s not a common motif, but I know I have run across its ilk before.”

“Putting it that way,” I decide, “I’ll compare it to The Lute Player, where the queen puts on the clothing of a minstrel to rescue her husband.”

“Hmmm,” Augustus thinks aloud, “the fairy tales love disguises, don’t they? I am now thinking of All Furs and Cap O’ Rushes, but isn’t it usually women who don disguises? Men will hide and deceive, but not put on other clothing. This idea takes my fancy.”

“Talking of fancy,” I stare at my pipe, “I haven’t taken one to this tobacco blend. It is rather awful.”

“Yes, I know. I had a dozen bag-ends of finings left over and threw them all together and gave them a fancy name. Well, sometimes a disguise works and sometimes it doesn’t.” 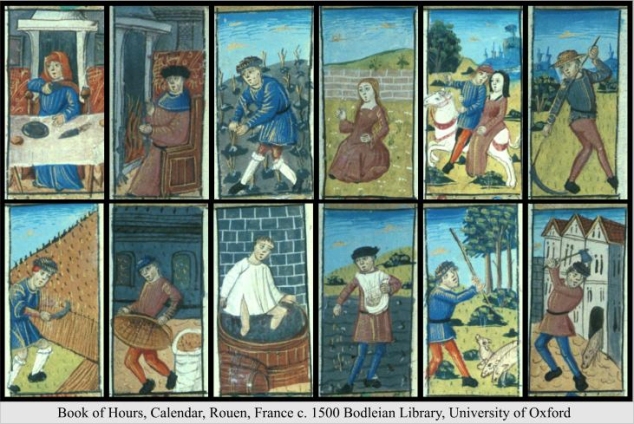 Despite the muggy August weather, Duckworth and I ply the oars, wending our way up the Thames.

“By the by,” I say, “If Augustus tries to fob off his Twelve Huntsmen blend on you, don’t fall for it.”

“Thanks for the warning, but you are too late. I bought an ounce of it out of curiosity. That’s the name of a story, isn’t it?”

I give him the summary, knowing he will never read the tales, making me his educator in these matters.

“Well,” says Duckworth when I am done, “let’s talk business, which is my forte.”

“Business is your forte, but what do you mean?”

“What are the economics of fairy tales?”

“I am thinking specifically of employment options.”

I shake my head in dismay, but then decide to explore this thought in his terms.

“All right. In The Twelve Huntsmen, the princess approaches the king to ask to be in his service.”

“Right,” says Duckworth, “imagine that happening today. Twelve huntsmen come to your door asking to be in your service?”

“I get your drift,” I say. “The fairy tales harken back to an earlier employment system. Going into service—being a servant—meant you were part of someone else’s household, giving up certain liberties, some of one’s independence, at a time when independence might be synonymous with starvation.”

“I was thinking about this the other day.” Duckworth pulls methodically at his oar. “When was the last time a house was built with servant quarters? I know there are still some live-in nannies, but I suspect that is about it.”

“True,” I concur. “There are still maids, cooks, and gardeners, but they all go home at night.”

“I return to my original question,” Duckworth looks directly at me. “What are the fairy tale employment options?”

“Well, for women there is being a princess, queen or a witch, even a witch-queen. There is the possibility of being a scullery maid for princesses in hiding. Young girls will often keep house for witches and evil stepmothers. Ugly daughters get to be lazy, but that’s not an occupation. There is the occasional henwife. However, none of them are nurses, teachers, seamstresses, or prostitutes. I suppose I shouldn’t be putting them all in the same sentence. ”

“Don’t think so,” says Duckworth. I continue rowing, and blathering,

“For the men, outside of kings, princes, and sorcerers, the millers are popular; so are farmers, fishermen, woodsmen, gardeners, soldiers, sailors, and tailors (but not weavers). There is at least one famous shoemaker, but no other leather workers such as saddlers or tanners. There are ironsmiths and goldsmiths, but no swordsmiths or tinsmiths. I don’t think carpenters or bricklayers appear, nor coach-makers or barrel-makers. Butchers, bakers, and candlestick makers only appear in nursery rhymes. The pope makes an entrance now and again, but not his cardinals or priests that I can recall. Judges and lawyers appear, but only as fall guys. Bankers, never.”

“Well, the folktales do have a broader range of careers available,” I advertise, “but not the fairy tales.”

“Is there any order to be made from your list?”

I think for a moment.