Bird in a Basket

I think winter wears thin on me because of my age, but it has worn thin on Duckworth as well, and he is a younger man. When the Met Office predicted a warm day, he rang me up to go rowing. I understand the American Ground Hog—Gus, I think they call him—has spoken of an early spring, and our balmy day may be a manifestation of that trend.

Duckworth and I ignore the frozen water along the edge of the riverbank and pull at the oars, freeing ourselves from winter’s doldrums.

“What frightening tales have you been telling Thalia these days?” Duckworth grins with a twinkle in his eye.

“If you are referring to my reading her Grimm, they are not frightful, if—well—a little grim sometimes. But to answer your question, Jorinde and Joringel.”

“Haven’t heard of that one. Anything like Hansel and Gretel?”

“Well, some of the constructs are the same, but, really, no, not the same story.”

I summarize for him.

“The story tells us there is a witch, who transforms by night into a cat or an owl, catching and eating other creatures. People she ensnarls get a special treatment. Men, she casts a glamour upon so that they cannot move until she releases them. Girls, she turns into birds, puts them in wicker baskets, and stores them away in a special room in her castle. “

“Two young lovers, Jorinde and Joringel,  walking in the wood become unaccountably sad and confused, and find themselves near the witch’s castle.  Jorinde sings out, answering a turtledove:

Oh my bird with your ring of red,

Sitting and singing your tale of woe!

You tell us now that the poor dove is dead.

You sing your tale of woe—oh-oh, oh-oh!

“Joringel is immobile as the witch transforms into her human shape, carries off the nightingale, then returns uttering, ‘Greetings, Zachiel. When the moon shines into the basket, let him loose, Zachiel, just at the right moment.’ ”

“Zachiel,” says Duckworth, shipping his oars for a moment, “Jorinde, Joringel. This story is full of strange names.”

“Returning to the castle, he finds the room where the wicker baskets of birds are kept. He ignores the witch spitting poison and gall at him, and looks for the basket that holds Jorinde among the seven thousand baskets that are there. When he thinks he cannot find her, he sees the witch carrying off one of the baskets. He chases after her, dispelling the witch by touching her with the flower, and turning Jorinde back into herself with another touch of the flower.

“After turning all of the birds into young ladies, he and Jorinde return home to live happily for a long time.”

“Hmmm,” says Duckworth. I see he is thinking. 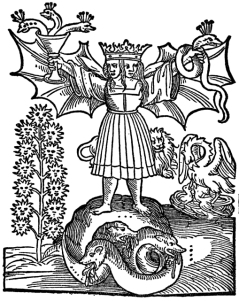 Duckworth pulls steadily at his oars. “Let me take a stab at analyzing this one.”

“Have at it.” I am pleased he is taking the tale seriously.

“Well, to start, the names ‘Jorinda’ and ‘Joringel’ are obviously similar, the female and male versions of the same root name, whatever that is.”

“I think you are right that this is not a Hansel-and-Gretel thing, where there is a brother and sister, rather these two represent one person, the animus and anima of an individual.”

“Oh, yes. Back in college I considered a psychology major, before taking up business.”

I had not known that.

Duckworth continued. “Jorinda and Joringel go for a walk in the wood.” He looks at me quizzically.

“The wood—the forest—is a place of danger in these tales,” I answer.

“Right, I thought so. As I see it, they bring the sadness with them into the forest. Well, I shouldn’t say they, they are really one person. What should I call him? Oh, well, let’s just say I.

I go into the forest. I am sad.” Duckworth stops. I see the wheels turning. “No,” he says, “it’s not sadness; it’s uncertainty.”

“Okay, so,” he muses, “enters the witch. Hmmm. She is the conflict. Call her evil if you like, but I see her as the soulless boss, dictating how I should act and what I should be doing. Actually, I can cast the witch as any number of bosses—authority figures, if you will—who have left my animus standing helplessly by as they carry off my anima in a basket; my anima being my creative side.”

“A bossy witch,” I contemplate.

“I guess I can sum her up as the accumulated conventions we are expected to follow.”

“Exactly, and our hero does just that after the witch releases him. He becomes a shepherd. Does the story say he liked his job?”

“It really says nothing more about it.”

“Okay, so, projecting myself back into the story, I am a shepherd and have a dream about a flower with a pearl in its center. My animus knows it is only half of who I am, having let my anima go in my uncertainty. I need a device to reclaim my other half.”

“And the device?” I prompt.

“I don’t know. That is where I am in the story. I ‘ve had the dream and now I am searching.”

“You only have nine days,” I prod, and notice we are farther downstream than we have ever rowed before.

Duckworth laughs. “I hope the nine days are metaphorical, but I have had these reoccurring dreams that I am an artist, and I am at some sort of party, and people I don’t know are talking to me about my art, and I don’t know what kind of artist I am.

“I have been dragging my wife and kids to more movies and even a couple of plays, lately. I hadn’t put it together before now, but I think I am looking for the flower with the dewdrop pearl in its center.” 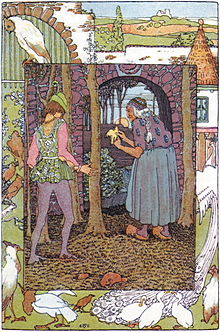 Melissa and I have agreed to meet in the park after she locks up her shop for the day. It is late enough in the winter that we have a little daylight. I sit by the fountain, a metal tree supporting three concentric bowls that get smaller toward the top of the tree. Water is meant to spill from the smaller bowl into the larger bowls, and then into the pool. At its base are four frogs, their mouths puckered skyward. This time of the year there is no water to animate them. They sit waiting, like me, for spring.

My moment of melancholy is swept away when I see Melissa approaching from beyond the fountain. I rise to greet her. She eyes me with concern. “You look—flushed.”

“I do? Oh, of course, Duckworth and I were out rowing today and got pretty far down stream and had to labor our way back. Do you know Duckworth?”

“Yes,” she smiles. “He was my last customer before I closed. I am sure you are why he bought a copy of Grimm.”

“Hah, yes, my small victory.” I tell her of the afternoon conversation.

However, the more I talk about animus and anima, and Duckworth’s analysis, the more somber she grows. “I know the tale well,” she says, “I read it rather compulsively as a young girl and then again after my first divorce.”

First divorce? I am learning so much about my friends today that I did not know before. “Ah, and what is your analysis?” We walk on, Melissa not speaking.

When we come to a bench she sits. I am beside her in a trice. “I will not analyze it,” she says. We sit, she plays with the drawstring of her coat, then laughs, and claps her hands, apparently at her own sense of humor. “Fairy tales are subatomic particles.”

I feel myself frown. “You will have to explain that one.”

“I am thinking of quantum mechanics, one of its rules being that at the subatomic level, the observation of an event alters it. I am saying, if you look too closely at a fairy tale it changes.”

She is disappointed when she sees the confusion in my face, and returns to playing with the drawstring.  A cat comes stalking across the dried grass, a wren in its sights. It moves in halting, menacing steps. Drawing close to its prey, it freezes, wiggles its butt and leaps as the bird flutters away.

“A rather silly cat.”

“Ow, that was visceral of you.” I love Melissa, but she can make me uneasy.

She smiles. “I have a more comfortable simile. Fairy tales are to be read as poetry, read for their emotional content. What good is it to parse the sentences of a poem? That is not where its meaning lies. It is all in how it makes us feel.”

7 thoughts on “Fairy Tale of the Month: February 2016 Jorinda and Joringel – Part One”