Today being Boxing Day, I am heading toward Augustus’s tobacco shop with, appropriately, a box under my arm. I soon hear the tinkle of his shop’s bell as I open the door. Augustus sits on his stool behind the counter; his arms are folded, but he throws them open when he sees me and my box.

I proffer him the gift, which he rips into.

“It has to do with getting the butter and sugar into an extreme state of fluff.” I don’t tell him it is my house-brownie who takes on the hardship of that task.

“So, what story did you tell Thalia for Christmas Eve?” he asks, while savoring his triangle of shortbread.

“It is hard to find a fairy-tale Christmas story,” I complain. “On the whole, they are not very seasonal. I got out my Badman’s Folk and Fairy Tales from Denmark, and the Danes didn’t fail me. I read her Gabriel Rider.”

Augustus looks at me quizzically, motioning for me to go on. His mouth is full.

Gabriel Rider is a soldier recently released from the army, who finds himself, on Christmas Eve, asking a miller for shelter.

Kindly, the miller explains he normally would oblige, but his family is moving out to stay with a neighbor, given that the mill burns down every Christmas Eve, and has for the past twenty-three years.

Gabriel decides to get to the bottom of this mystery and offers to stay in the mill. He builds himself a good fire in the fireplace, and is soon joined by twenty-four cats led by a large gray. The cats, holding each other’s tails, dance in a circle, eyeing the flames in the fireplace.

Gabriel takes his sword and draws a line around the fireplace that the cats cannot cross, then makes the sign of the cross over the doors, allowing no escape except through a gutter hole. This hole he guards, and when the dancing is over and the cats try to leave, he gives them each a blow with his sword as they disappear into the night.

The next day he goes to the nearest village in which stands twenty-four houses. In the first house he finds a witch—whom he knows to be the gray cat—taken to her bed while her husband has gone off to church. She pleads with Gabriel not to reveal her secret, and promises both to hurt no one again, and to give him a good sum of money.

Gabriel agrees to the bargain, which he replicates in the next twenty-three houses he visits under the exact same conditions. By the end of the tale, Gabriel returns home a wealthy man.

Augustus carefully boxes up the rest of the shortbread so that he will not eat it all in one sitting.

“I’ve not heard this one, but have come across Christmas Eve visitations before. There is an old notion that the year is a circle, and by being such ought to have 360 days, just as the circle has the same number of degrees. That leaves about five days left over that shouldn’t be there.

“In northern traditions, those five days fall between Christmas and the New Year and is a period of the thinning of the veil between the worlds.”

“I thought that was Samhain.”

“Both the fall equinox and winter solstice have that reputation.”

“Somehow the greeting, ‘Have a haunted Christmas,’ doesn’t have the same ring,” I suggest. 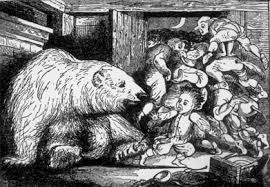 “You have caused me to remember,” I say, “The Cat on the Dovrefjell, in which a man, who is taking a white bear to the King of Denmark, stops on Christmas Eve at the cottage of a commoner named Halvor. Halvor is leaving his home, warning the traveler that the trolls take over his house every Christmas Eve to feast and dance. The man and the bear stay nonetheless and when the trolls taunt the bear, it attacks, driving them from the cottage.

“The next Christmas Eve day, a troll calls from a distance to Halvor, asking if he still has that big cat. Halvor assures him that he does and the cat now has seven kittens bigger and fiercer than herself. The trolls visit no more.”

Augustus chuckles. “There are at least a half-dozen variants of that tale, but the punchline is the same and always works.”

I am struck by a thought. “Was Dickens drawing from this Christmas Eve-visitation thing for his Christmas Carol?’

“I would not doubt it.” His eyes are lingering on his box of shortbreads.

“Then there is the twenty-four thing,” I ponder aloud.

“Oh, right you are. I haven’t a clue.” He opens the box and takes out one more triangle. “The more I think about it, the more mysteries there are in this tale.”

“First off, why does he have a full name? Old soldiers are usually called ‘the old soldier.’ Some fairy-tale characters have a first name, like ‘Rapunzel.’ Some have a descriptive title, like ‘Iron John,’ but no one else has a surname and given name, Snow White and Baba Yaga notwithstanding. And look, the story is entitled Gabriel Rider. That indicates there being some significance in the name.”

I nod in recognition of his point; then he goes on.

“And we seem to have a commoner with some magical knowledge. Typically, in the fairy-tale realm, royalty, witches, old women in the wood, and wizened little men have magic. These last two might be magical helpers who give the old soldier or generous youth a cloak of invisibility or a pair of seven-league boots, but the soldier or youth do not themselves practice magic.

“Yet, here is our hero, drawing a line with his sword around the fire, which the cats cannot cross, and making the sign of the cross above the doors, knowing it will prevent the cats from escaping.”

“And what do these anomalies suggest to you about the story?” I ask.

“Did the telling of the tale have any markers of being literary?” Augustus’s eyebrows rise.

“No, none at all,” I say. “It has the authentic fairy-tale brevity; no flourishes.”

Augustus goes to his desk in the corner and types “Gabriel Rider” on the keyboard.

“What are the results?” I ask.

“Well, there seems to be a film character with that name associated with motorcycles and flaming skulls, a reference to Stephen Badman’s book, and thirty-nine matches in the Whitepages.”

“From which you conclude?” I bait him.

“I adhere to my previous statement.”

“Johannes,” I address he-who-has-condescended-to-own-us lounging on his cushion in the window seat, “what is the connection between cats and fairy tales?”

“I assume,” Johannes sits up, “you are referring to that horrid little story you told to Thalia the other night.”

“Gabriel Rider, yes, but ‘horrid’ seems a little strong of a descriptor,” I challenge.

“Maiming and blackmailing twenty-four sith cats qualifies as horrid in my eyes.”

I take note of the term he uses. “Sith cats?”

He sees my confusion.

“You’re looking at one.” His tone holds a hint of contempt for me and pride for himself. “Although the name is a misnomer. Witch-cat would be more representative.”

“We sith cats are Scottish in origin and Celtic in nature. All we sith cats were once witches. A true witch has the power to turn herself into a black cat with a white chest.” He puffs out his own a little. “In that form, we can wander around the countryside unnoticed. There is one caveat. We can only turn into cats and transform back eight times. On the ninth transformation, we remain a cat.”

“But wait a moment, Johannes; you are a male cat.”

“Did you not pick up on the word ‘transform’?”

“Quite. And your horrid story got our coloration wrong. We are always black with a white spot; we are not grays.”

“A cat has nine lives,” I mutter to myself. “For three he plays, for three he strays, and for the last three he stays. That comes out of a childhood memory. Told to me by my nanny, if I remember rightly.”

“Then as a witch, you changed yourself into a cat for a ninth time knowingly? Why?”

“As a witch I was quite old. As a cat, I started over again, giving me a bit more longevity. Besides, a cat is a superior form.”

I let that comment pass. “Is it true that, if a black cat crosses my path, it is an ill omen?”

“Well. . . ,” Johannes is hesitating, “we may not be the best company, particularly if you happen to be a corpse.”

“There is the notion that, if a sith cats jumps over the dead before burial, it can steal the deceased’s soul.”

“That’s one of the reasons for the wake, to keep us away. In Scotland they will not even light a fire in the fireplace, knowing we are attracted to fire.”

“Make sure you give me a saucer of milk on Samhain.”

“Thalia gives you a saucer every day.”

“Yes, I know; she has my protection forever.”

Now there is a comfort.

2 thoughts on “Fairy Tale of the Month: December 2016 Gabriel Rider – Part One”