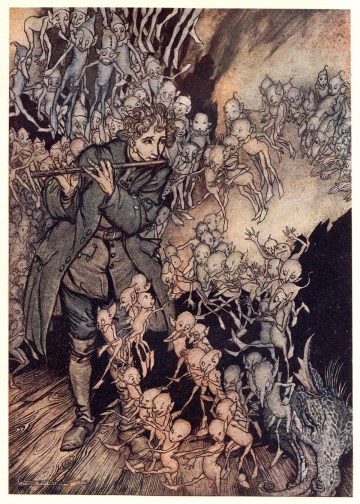 I come into the study with a bit of water in a glass to save my aspidistra, and see Thalia’s copy of Grimm lying open on the study table. The title at the top catches my eye. The Gnome.

I don’t think I’ve read that one.

The king has protected his favorite apple tree with the curse that anyone who picks and eats one of these apples will be sent a hundred fathoms underground. His three daughters, thinking the curse does not apply to them, pick and eat one of the apples, and disappear.

The king declares any man who can reclaim his daughters may marry one of them.

Among the many searchers are three huntsmen, who happen upon an empty castle with hot food waiting for them on the table.

The next day, using the castle as their base, the two youngest huntsmen venture out to find the princesses while the eldest stays to keep an eye on the castle. At noon, a gnome comes in asking for some bread. The huntsman cuts him a piece, but the gnome drops it and asks him to pick it up. When the huntsman does, the gnome grabs him by the hair and gives the huntsman a good thrashing.

Rotating duties the next day, the second huntsman gets the same treatment, but the two of them do not tell the youngest huntsman what to expect.

The youngest does not fall for the trick and gives the gnome a good thrashing, stopping only when the gnome promises to tell him how to save the princesses. The gnome shows him a deep well without water, at the bottom of which are the three princesses under the control of multi-headed dragons.

Before the gnome disappears, he tells the youth not to trust his companions.

The young huntsman tells his brothers what he has learned—the story revealing for the first time that they are siblings.

Wait, it’s that motif again, the one that keeps haunting me. I’ll bet Melissa is reading this too.

The elder two are not willing to be lowered in a basket at the end of a long rope into the well, and it is the youngest who descends with a bell and a knife.

At the bottom are three rooms, the first door of which he carefully opens. In the room is a princess delousing a nine-headed, sleeping dragon. The huntsman cuts off the heads, and the princess showers him with kisses and gives him a golden necklace.

The youth saves the other princesses from their dragons, one of seven heads and the other of four heads,  and is showered with more kisses.

Returning to the basket, he puts the first princess into it, rings the bell, and his brothers haul her up. When the princesses are safe, the youth remembers the gnome’s warning and puts a large stone in the basket. The brothers begin to haul it up, but then let it go crashing down to the floor.

Betrayed but alive, the youth is trapped in the well. At length, he discovers a flute hanging on the wall. For every note he plays on the flute, a gnome appears. When the room is filled with gnomes, they ask him what he wants of them. He tells them he wishes to be upon the earth’s surface. Each gnome grabs a strand of the huntsman’s hair and fly him up to the surface.

The two elder brothers are hanged and the younger brother marries the youngest princess.

The tale ends with a bit of traditional foolishness as the narrator claims, “When the wedding took place, I was wearing a pair of glass shoes and stumbled over a stone. The stone said, ‘clink’ and my slipper broke in two.”

“Oh,” says Thalia at the study door, “there’s my book. What’s it doing in here?” 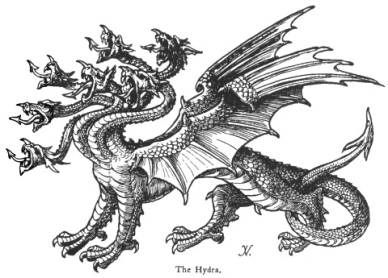 “Melissa,” I type into my email to her, “did you just read The Gnome? It lay open on my study table and no one knows how it got there. And guess what. . . ?”

I wait a minute and she answers, “When I came downstairs this morning, it lay open on my counter. I don’t know how it got there either.

“At least we know how the three princesses got to the bottom of the well. This is an example of the unintended wish-fulfillment, which starts so many fairy tales.”

I adjust the font size to read her response more easily and type, “That is followed by the obligatory promise of marriage to a princess as reward for the rescue, but after that, things turn a little odd.

“The three huntsmen, whom we find out much later are brothers, stumble onto the empty castle with food on the table. The empty castle is a common-enough motif, but it plays no role in the story.”

I hit send, thinking I haven’t completed my thought. Melissa completes it. “The golden necklace given to the younger huntsman, another common motif, also plays no part in the story.

“What I enjoyed was having the youngest-brother-being-the-gentlest-and-kindest-motif getting turned on its head when the gnome asks for bread.”

“The eldest brothers were not exactly saintly either,” I respond. “Also, I find it inexplicable that the Gnome did the youngest the courtesy of warning him about his companions. And what about those dragons?”

“9,7,4,” the numbers appear on my screen. “More oddness. The seven-headed beast could be a hydra, but in this context, I don’t think so. Usually, when meeting multiheaded dragons—or multiheaded giants—the number of heads increases, raising the tension in the tale. Here, again, it is the opposite. Besides the diminishing tension of fewer and fewer heads, the task of dispatching the dragons with only a hunting knife felt far too easy.”

“They were asleep,” I defend the tale.

“Still,” is her one-word reply.

“And the flute hanging on the wall?” I type.

“My favorite part. For every note a gnome. Arthur Rackham did a wonderful illustration of that. Then being carried away by your hair! What fun.”

“I took note,” I tap eagerly on the keyboard, “of the reappearance of the iron stove, after the princesses had promised to tell no one the truth, but can tell it to an iron stove. Stolen right out of The Goose Girl.”

“Maybe,” Melissa returns. “The Grimms in their notes mention some variants, but none mention the stove.”

“You read their notes already?” I query.

“You don’t think I haven’t done my research, do you?”

“The variants are similar, the hero and his companions are knights or princes. The helpers are sometimes elves brought forth by the flute instead of gnomes. The many elves form a staircase for the hero to climb up. One of the punishments for the unfaithful companions is to be sewn into a bag of snakes. But none mention an iron stove.

“I have the unfounded suspicion that Wilhelm stole the stove from The Goose Girl for his own purposes.”

“Or,” I consider, “The Goose Girl stole from The Gnome. Which came first?”

“Or was it one teller stealing from another and the Grimms simply recorded it?”

“We are devolving into nonsense,” I try to conclude.

“There was a man upon the stairs,” she quotes.

“A little man who wasn’t there,” I type.

“He wasn’t there again today,”

Fairy Tales of the Month: March 2020 The Gnome – Part Three

Time for a walk in the forest. The sun is high in the sky, noon I’ll guess. I am in the bad habit of waiting until close to sunset when the Magic Forest is not safe. I congratulate myself for getting here in a timely fashion. I approach the pond surrounded by sitting-stones and hear someone call to me. “Oh, there you are.”

“How are you and your dragon?” she asks politely.

“I knew you’d be coming,” she rushes on. “I sensed it the moment I woke up this morning.”

“How extraordinary,” I say. “I do have a question for you. I am reading a fairy tale in which the hero must defeat a nine-headed dragon, followed by the seven-headed dragon, and at end, a four-headed dragon.”

Ultima looks at me with a bit of alarm, but I continue. “Is there some significance in the number of heads?”

“My,” she says, “what a violent tale. I’m not aware of any significance in the multiple heads of dragons. This is, of course, the stuff of fairy tales. I don’t think there has ever been a dragon with more than one head.”

“Well,” I answer, “I wouldn’t know. Where I come from there are no dragons.”

“No dragons!” Ultima is truly shocked. “Where do you come from?”

Ultima stares at me a bit longer. “How ever do you get along? Don’t you have war, famine, pestilence?”

“We have various mechanical devices to transport us,” I reply.

Ultima rolls her eyes. “Why don’t you have dragons?”

“There never were any dragons.”

“I’m sure there were. You just referred to a fairy tale with multiheaded dragons. The inspiration for them must have come from somewhere. What is your oldest story about dragons.”

I rack my brain. “We have images of dragons from all our cultures going back to the dawn of civilization, but the oldest story I can think of with a dragon is Beowulf.”

“Yes,” Ultima delights, “when Beowulf faces the Dragon of Earnanæs and makes the Eternal Pact with him.”

“No, in our version, they kill each other.”

“Ah, well, there you have it. In your world Beowulf and the dragon do not agree to cease fighting with each other and among themselves—with the dragons enforcing the pact—and Beowulf does not go out on the grand adventure to find his dragon a mate, from which all dragons now living are descended. Because of the pact, peace and cooperation rule my world.”

“You are ruled over by dragons?” I ask.

“No, not ruled over. We are in a symbiotic relationship.” Ultima leans in and whispers, “Really, they are just big babies and love to be pampered.”