Tradition is not cut in stone. Thalia has taken over my comfy chair in the study as she reads aloud. I am relegated to a lesser chair, but make myself useful by tending the fire in the hearth as she reads to the company.

And I do mean company. Prime among them is the fairy perched on her shoulder, but also in attendance are Johannes curled up on the window seat, myself seated in the lesser chair, and even the brownie lurking in a dark corner with two more brownies peeking from behind him.

I didn’t know there was more than one brownie in the household.

The fairy chooses the story, flying down from her shoulder perch, alighting on the table of contents of the book on Thalia’s lap. She puts her tiny foot on a title.

“That one.” Her little voice has the tinkle of breaking glass.

“The Curse of Pantannas,” Thalia announces.

The owner of the farm of Pantannas, near Glamorgan, annoyed by the fairies dancing in his field by night, took the advice of a witch and plowed the fairy ring using an iron ploughshare.

Nothing more happened for months, until harvest time. One evening, the farmer and his family heard a noise that shook the house and a voice repeated, “Vengeance cometh.” In the morning they saw the crops were turned to ashes.

The little man reappeared and said, “It but beginneth.”

Fearing his destruction, the farmer pleaded with the little man and promised to leave the fairy ring alone. The little man declared the king of the fairies had pronounced revenge on the farmer and it could not be taken back, but allowed he would intercede for the farmer if he could.

As a result, the curse was deferred and would not fall on the farmer, or his son, or his son’s son, but rather on a future generation. The farmer, content with that, later died in peaceful old age.

A hundred years later, young Madoc, heir to Pantannas, celebrated his betrothal to Teleri, daughter of the local squire, at Christmastide by inviting all her kin to a feast. During the course of the evening, three times the gathering heard declarations that “vengeance comes,” and was visited by a hag who spoke of a waiting doom.

Late that evening, Madoc escorted Teleri to her home, but then did not return to Pantannas. Madoc’s parents conferred with a hermit, who suggested that even if Madoc were still alive, he would not return in their lifetime.

However, Teleri never gave up hope. Every day she climbed to a summit overlooking the landscape and watched for a sign of her returning lover. This she did year after year until her hair turned silver, and her eyes dimmed. It was said she died before her time.

Eventually, all who had known Madoc died as well.

Madoc, however, while returning home after seeing Teleri to her home, heard marvelous music coming from a cave. He entered it, following the sound, trying to discover its source. For some time he went deeper and deeper into the cave until the music stopped.

Retracing his steps, he returned to Pantannas to find an old man sitting by the fire, who treated him as an intruder, demanding his name. The old man only knew the name “Madoc” from an old tale of a man who mysteriously disappeared.

Realizing his fate, Madoc sat down and wept. The old man, showing sympathy, put a hand on his shoulder and Madoc turned to dust.

Thalia solemnly closes the book and the fairy flutters her wings in pleasure, reminding me that fairies are nasty little creatures.

Fairy Tale of the Month: April 2020 The Curse of Pantannas – Part Two

The company wanders off—Thalia to bed where she will sit up and read till midnight, the fairy settling in Thalia’s bedroom as well, and the brownies creeping back into the kitchen—leaving Johannes and me in the study. I pour a glass of sherry from the decanter on the library table and reclaim my comfy chair, turning it toward the hearth, pulling my patchwork quilt about my legs.

The story Thalia read came from The Welsh Fairy Book, by W. Jenkyn Thomas. When I contemplate a tale, I usually break it down by motifs. This one makes me think it is made up of bits and pieces.

With a long sip of sherry, I start by thinking about the farmer plowing up the fairy ring with the iron ploughshare, iron a talisman against anything fey. Fairies can hardly be mentioned without the fairy ring being part of the conversation. It is the circle on the ground where the fairies have danced, a pattern left behind, usually manifested by mushrooms growing in a perfect circle. Nonbelievers dismiss the rings as a natural phenomenon, but one cannot look upon that ring of mushrooms without a certain amount of wonder.

When the story speaks of the king of the fairies, who might that be other than Oberon? We first meet Oberon in a Merovingian legend (the Franks, fifth to sixth century). He winds his way into other French stories; and Shakespeare embroiders his play with both Oberon and his queen Titania. Although we never see the king of the fairies in our story, he is the backing for everything that happens.

I put another log on the fire and sip a bit more sherry before returning to my contemplations.

The unfortunate Madoc holds the celebration of his betrothal at Christmastide. That may appear insignificant but is another piece of the pattern that makes up this tale. The Danes, historically, made great inroads into our isle; just witness the area of England once called the Danelaw. There is a tradition in all those Nordic countries that during the period from the start of Christmastide until New Year’s Day there is a thinning of the veil between the worlds. Numerous, uncanny tales take place just before the year’s end.

I reach for my pipe and tamp in tobacco from my canister labeled Fairies’ Delight.

The matter of time passing quickly while in the company of fairies goes back at least to the Fenian Cycle of Celtic legend when Oisín takes a fairy wife. After three years in fairyland—Tir na nÓg—he visits his family to find them gone three hundred years. When he is accidentally dismounted from his horse, as his wife warned, he is turned into an ancient being and no longer able to return to Tir na nÓg, not unlike the misfortunate Madoc turning into dust; another piece of the fabric of our story.

Forlorn love is certainly a rarity in fairy tales. At least the German fairy tales do not end until the heroine is safely married. In our tale, Teleri pines away in the best romantic fashion.

This Welsh tale does not strike me as a variant of a similar tale, but rather a composite of notions, characters, traditions, and styles, sewn together like a patchwork quilt.

Fairy Tale of the Month: April 2020 The Curse of Pantannas – Part Three 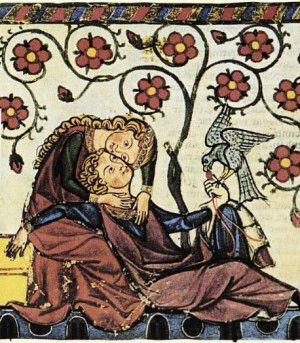 “Johannes,” I say, “did Thalia’s fairy tale tonight strike you as a little unfair?”

“Well obviously, the punishment for the committed offense was deferred, because of the farmer’s sincere regret,  and put upon an innocent heir.”

“I suppose,” Johannes yawns. “But the king of the fairies declared vengeance and there is no taking such a thing back.”

“Because a fairy’s sworn word is law. Neither can they utter a lie, by the way. Fairies make up for not lying with misdirection and deceit, but their word is sacred, immutable, and takes on a life of its own.

“Think of it as similar to gossip and rumor in the mortal world. Once spoken and out of a person’s mouth, the words cannot be put back in the mouth, and substitute for truth whether they contain any or not.”

“I will grant that, but, back to my point,” I complain, relighting my pipe, “wasn’t the punishment clearly unfair?”

Johannes’s fur ruffles, which I take as a shrug.

“Vengeance had been declared and needed to be exacted, if not on the original perpetrator, the farmer,  then on someone, his heir.”

“Why do you refuse to see my point about the unwarranted unfairness of it all?”

“Shouldn’t it be expected?” Johannes returns. “Certainly it is common enough. For example, take you humans’ concern for the environment.”

“What does the environment have to do with Madoc’s misfortune?”

“The stories are very similar. Humans are using up the earth’s resources—plowing up the fairy rings as it were—and anticipating that the future generation will pay for their neglect, possibly—like Madoc—with their very existence. Perhaps the story is a warning to you humans rather than meant to be pleasing and entertaining.”

Johannes can be so disturbingly moral.

I will ignore his slight on our existential conundrum, and focus on his implication that we expect a fairy tale to please and entertain us. The Grimms were aware of happy endings and wanted to please their bourgeois audience and young readers. After the success of the Grimms’ work, it became the benchmark for other popular collections.

I won’t saddle the Grimms with the accusation of inventing happy endings in fairy tales. It is simply human nature to be attracted to both humorous and pleasing tales. We will take heed of a few cautionary tales, but our love of entertaining tales abounds.

I guess my issue is with our expectations. We have come to expect fairy tales to end happily ever after. Those three words seem to evoke the essence of these tales for us.  When the fairy tale does not end in marriage but rather in tragedy, we feel disappointed, even cheated. We crave an acceptable resolution. Losing one’s bride and being turned into dust is not an acceptable resolution in our minds.

“Besides,” Johannes speaks again after a long pause, “it’s Welsh.”

Well, that does account for an unhappy ending, doesn’t it?