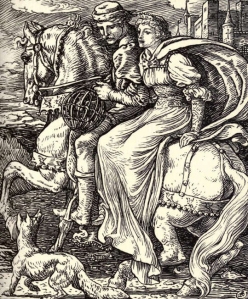 Thalia and her Teddy sit on my lap, she carefully paging through the familiar, battered copy of Grimms’. Her finger rises into the air and lands on a picture of a young prince riding on the tail of a fox. I turn the pages back to the beginning of the tale as Thalia nestles into the crook of my arm, and I read The Golden Bird.

The king, upset that golden apples from his tree in the pleasure garden are being stolen, one by one, each night, sets his sons to guard the tree. The eldest son stands guard the first night, the middle son the second, but it is the youngest on the third night who sees a golden bird take an apple.

The king sends out his eldest, into the wide world, to capture the golden bird. He is met by a fox, who advises him not to spend the night at the brightly-lit inn he will encounter, but rather stay at the dismal one across the street. The eldest is attracted to the merry sounds coming out of the better inn, and does not heed the fox.

The middle son soon joins his brother, also dismissing the fox’s counsel. The youngest prince is more attentive and spends the night in the dismal inn.

The king of the Golden Horse wants the princess of the Golden Castle. Ever faithful, if scolding, the fox helps. When the hapless prince is condemned to death for the third time, he still has a chance to win the princess if he can remove a mountain in eight days. He digs for a week with little result. The fox appears and sends him off to bed. The next morning the mountain is gone.

The prince, finally attuned to listening to the fox’s instructions, is able to trick everyone on his return trip, and ends up with the princess, the Golden Horse, and the Golden Bird. Plus, he rescues his brothers from being hanged. His brothers repay him by throwing him down a well, about which the fox had warned the young prince.

The two brothers return home in glory with their bounty as the fox helps the young prince out of the well. In disguise, the prince sneaks into the castle, and all is soon revealed, with the two brothers finally put to their proper deaths.

The fox reappears, asking the prince to shoot him, and cut off his head and paws. Reluctantly, the prince does so, and the fox is transformed into the brother of the princess of the Golden Castle. All live happily ever after.

Thalia shifts in my arms uneasily. “I’m going to ask mommy for a sister. I don’t like brothers.”

I am sure she is right.

I know the clock on my mantle is chiming midnight, but I am standing in a Gothic cathedral. I am not sure to what age I have been transported, now or then. What I see are moonbeams struggling to illuminate a lead-glass window. Such stained-glass windows are and were great storytellers for the illiterate.

In the center of the tall, narrow, pointed arched window, the mosaic of colored glass depicts Cain about to kill Abel. A cloud covers the moon and the image fades.

In The Golden Bird two wayward brothers dispose of their younger brother by throwing him down a well, raising to my mind’s eye the form of the biblical Joseph. He, too, was cast into a well by his jealous brothers before being sold into slavery.

Tellers knew this biblical tale, if only from seeing it pictured in glass, but other models may have served as an inspiration. The histories of the royal families of Europe are filled with the deaths of heirs and possible heirs at the hands of family members in ongoing power struggles.

But not all the brotherly relationships in fairy tales end in dire ways. In The Queen Bee the younger brother releases his two brothers from servitude when they tarry at an inn too long and beyond their means. His siblings misbehave even further, but never turn on him, and are rewarded with princesses as brides in the end.

Nonetheless, a pattern emerges from stories that have three brothers in them. The younger brother is named Simpleton, or is thought little of by his family, or is laughed at by his older brothers. Tasks to be performed are attempted first by the eldest, then by the second eldest, and at last by the third, who succeeds through kindness and/or generosity, with magical gifts, or by promises fulfilled by those he helped. If all the brothers succeed in some way, then the youngest clearly succeeds the most.

With humor, let me note the above applies when there are three brothers. If the story has two brothers, then one of them must save the other, unless one is rich and the other is poor, in which case their fortunes are reversed. If there are six, seven, or twelve brothers, likely they are turned into swans or ravens. Are these numbers significant?

Not really. Although there are patterns, we should not look too closely at these patterns to find meaning. We need to step back and look at the whole of these stories. We see stories with our mind’s eye, but need to filter them though our hearts.

The moonlight has returned, and again I see Cain creeping up behind Abel, a crime forever about to be committed, set in glass. Not only crime but also harassment, defamation, and deception directed against our brothers has been widely committed since that original act, boding ill for the future. Born to see ourselves as the center of our universe, we slowly learn to reckon where we are in the greater context. A task taken on by the fairy-tale genre is to help us visualize how our selfish acts affect all of us, no matter the number of brothers involved. And to see redemption when the hero sets self aside.

Cain looms over me as I light a candle and say a prayer for my brothers’ safety.

From The History of Little Goody Two Shoes

“Well, what sort of unhealthy literature are you reading to Thalia these days?” There is a devilish glint in Duckworth’s eyes and I know I am being baited, but I take it gladly.

“Unhealthy? How can you cast a fairy tale as unhealthy?”

Duckworth and I are usually rowing partners out on the Isis, but the weather is too cold, and we have opted for a continuous ramble around the quad.

“Well, let’s take for example what you are reading to The Girl right now.”

I relate to him the bones of The Golden Bird. I see Duckworth scowl with a touch of animation at certain points.

“Well, what about his inability to follow the fox’s directions? There is hardly anything admirable in that. Aren’t fairy tales supposed to instruct?”

“Fairy tales can and do instruct, but that is not their sole purpose. However, for our argument, I will say, yes, they do instruct, but not by Goody Two Shoes examples of good behavior that the listener is expected to admire.”

“Who from a State of Rags and Care,” Duckworth recited,

“And having Shoes but half a Pair;

Their Fortune and their Fame would fix,

And gallop in a Coach and Six.

You know, The History of Little Goody Two Shoes is the only kid’s book my mother ever read to me.

“What problem?” Duckworth smiled, then points. “Let’s sit awhile on the bench over there.”

We cut across the quad and commandeered a wooden bench.

“I saw it,” Duckworth looks heavenward, “and enjoyed getting away with it. Neither you, your prince, nor I can follow instructions.” He waves his index finger dramatically, “Is this story then teaching defiance of authority?”

“You overstate,” I answer. “My take: The story speaks of honoring and dishonoring.”

Duckworth sits back, folds his hands, and is content to listen.

“Notice when the prince listens to the fox and when he does not. When the fox tells him to stay in the dismal inn, the prince does. There is no honor involved.

“On his return trip he allows himself to trick those who dishonored him through manipulation under threat of death.

“Nor can he dishonor his brothers by allowing them to be hanged, and this, again, to his disadvantage.

“And please note, no judgment is made about the nature of honor. The story simply illustrates honor’s pitfalls and triumphs.”

4 thoughts on “Fairy Tale of the Month: January 2014 The Golden Bird – Part One”