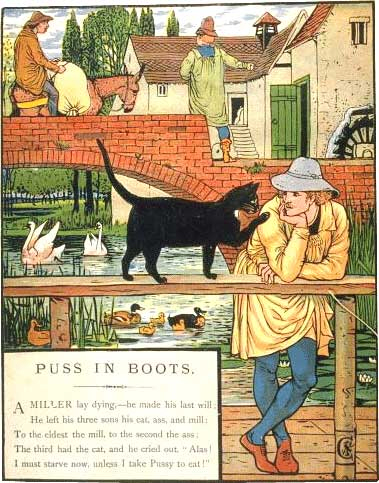 I am undone, abandoned in a harsh world. Although a friendly fire burns on my hearth, there is no companion with whom to share its warmth, nor share a story. Thalia is on a sleepover.

Johannes curls up on the back of the sofa, his tail wrapping around his black body.

His yellow eyes focus on me. “The title?”

I consider for a moment. “Puss in Boots.”

“Or, The Master Cat.” I go for the same story’s alternate title.

“Why would I listen to such a thing?”

“Because the cat is the hero?” I offer, reaching for Andrew Lang’s Blue Fairy Book.

Johannes does not get up and leave the room. I take that as permission to continue.

The Master Cat or Puss in Boots starts with the miller’s three sons getting their inheritance, the youngest receiving a cat as his due. The youth considers eating his cat and making warmers of its fur, but the cat suggests a more novel idea, that of the master acquiring for his cat a pair of boots and a bag.

Thus arrayed, the cat bags a rabbit and resplendently dressed—illustrators have given him a cavalier hat as well, though the story says nothing about it—presents the food gift to the king saying it is from the Marquis of Carabas. The gift-giving goes on for months until one day the king and his daughter are out for a drive in their carriage. Following the cat’s instructions, the young man undresses and submerges himself in a pond. The cat cries out that his master, the Marquis of Carabas, has been set upon by thieves and is now in fear of drowning.

The king, having received so many gifts from the Marquis, is happy to rescue and clothe the poor fellow. The cat runs ahead of the king’s carriage, instructing all he meets—along with threats—to declare these are the lands of the Marquis of Carabas.

The cat goes to the ogre’s castle—the real owner of the lands—to admire the ogre’s shape-shifting abilities. The ogre, suffering as ogres do with an inverse relationship between their powers and their intelligence, allows himself to be talked into turning himself into a mouse, with predictable results.

The marquis assumes ownership of the castle, and the king, impressed with his wealth, proposes that the young man marry his daughter, the idea of which the young man and the king’s daughter are way beyond him, having fallen in love the moment they laid eyes upon each other. The marriage is made and so is the cat, now only chasing mice for sport at his leisure.

“A French cat, isn’t he? “Johannes’ eyes are half-closed in superior mode.

“Yes, the story is by Charles Perrault, written sometime in the late sixteen hundreds.”

“I can tell he wasn’t a proper English cat, not nearly condescending enough toward his provider. In fact, he is the provider.”

“Actually, the original source is Italian. Both Giovanni Straparola and Giambattista Basile had versions of it.”

“Mediterranean cats aren’t much better than the French, subservient with skinny tails, all of them.”

Duckworth and I pull at the oars. It is delightful to be on the river again on a glorious spring day.

“Tell me, what tale have you foisted upon poor Thalia recently?” Duckworth says that simply to make conversation, knowing my passion for the tales.

“Thalia escaped. Off to a sleepover. I told to the cat.”

“No, not at all. I told an appropriate story to engage his interest—Puss in Boots.”

Duckworth missed a beat with his oar. “Really? You’ve finally landed on a story I know well.”

“Oh, are you a fan of Charles Perrault?”

“Perrault, the author of Puss in Boots.”

“Oh, is that who wrote it? I thought these tales were authorless—traditional.”

“Well, yes and no. Some versions are definitely literary.”

“I see. Well, I use this story as an example in one of my seminars.”

“Seminar?” My turn to miss a beat.

“Yes, on branding and marketing.”

“That cat’s a genius marketer. Listen, to start, the cat is threatened to be eaten up by the competition. What does he do to survive? He comes up with a brand—the boots. Totally iconic. Throw in a cool hat and he is a made man.”

“He’s not a man.” Duckworth ignores my protest.

“Now, having his identifiable brand, he needs to create a demand for his product. What does he do? He catches rabbits and partridges, etc. and gives them to the king. Freebies. Giveaways. No better way to attract attention to your product than to introduce it by handing it out, usually a downsized version.”

“Now, having his brand and having a demand strategy in place, he takes the next step in getting the customer to buy into the product. By creating a situation, a position if you will, the cat gets the king to take the young man into his carriage, into his sphere of awareness, his marketplace.”

I know I am gaping.

“The cat runs ahead of the carriage, creating a stir among the peasants to do his bidding. Strong-arm tactics, creating a buzz. Yes, he uses threats, which could lead to a legal battle, but why not? Publicity is publicity. Everyone now knows you are a player; whether you win or lose the case, your name, your brand, is out there.”

“Immediately,” Duckworth continues, on a roll, “the cat minimizes the competition—the ogre—and assumes his prerogative.”

I wipe a tear.

“The cat doesn’t even have to make the sales pitch. The consumer, the king, suggests the purchase—the marriage. It’s brilliant!”

“Yes, I know.” Duckworth waves his hands in the air. “They messed up on the logo. They had their cat in boots all right, but turned the bag into a swag, making him look like a bum. Had they put a natty hat on him, they might still be in business.”

With no warning, we lurch forward. Since neither of us have been paying attention, we’ve run aground.

I skirt the edge of the Magic Forest as I amble along on my evening stroll, which I am squeezing in between a rain squall and the sunset. Notions about Puss in Boots float around  in my thoughts while my pipe smoke encircles me for a moment before drifting off into the arch of tree limbs.

Puss in Boots is a literary tale, with a known author, but even if I didn’t know his name, the story is absent the usual markers of a traditional fairy tale. The one traditional marker it does have is the trickster/animal helper, and yet I can qualify that.

The pedigree of the fairy-tale trickster goes back to the trickster gods, such as Loki of the Nordic pantheon, who could transform himself into animal shape. I doubt there is a culture that does not have a trickster figure lurking somewhere in its lore.

Just as popular are animal helpers. In the fairy tales these creatures abound, but I have noticed the majority of them fall into two categories. First, the hero or heroine is often helped by an enchanted being in animal form, who at the end of the tale regains human shape. A famous example is The Frog King, and there is also The Golden Bird.

The second category of animal helpers is from stories like The Queen Bee and The White Snake. In these tales the helpers come in sets of three and in groups. Taking The Queen Bee as example, the hero is helped by a colony of ants, a flock of ducks, and a swarm of bees in exchange for his kindness to them.

Now, there are stories like The Six Swans in which the brothers are turned into swans and their sister must restore them, but these are not animal helpers. Also, there are animals in fairy tales that are simply animals, but these tend to talk among themselves and not interact with humans to any great degree. I am thinking of The Bremen Town Musicians or The Companionship of the Cat and the Mouse (You can imagine where that latter ends without reading it.) Here the animals are the main characters in the story and not in a trickster or helper role.

None of the markers I am thinking of quite fit our puss wearing boots. The cat is not an enchanted prince. He is not part of a colony, flock, or swarm. He does not talk to any other animals—his peers.

I pause in my stroll for a bit, and sit on a stump, studying my wet wellies. My boots are plain, not like what I imagine the cat wears. I assume the cat was not wearing rubber rain boots. As Johannes pointed out, this is a French cat. How the young master afforded fancy boots, not to mention the size issue, is of no concern to the story. What strikes me is I have not encountered an animal in a fairy tale that is dressed in any fashion. Illustrators might put clothing on them, but not the story.

Not so with Puss in Boots, which one can tell by the very title. Clearly a marker for a literary tale, the invention of a bold, individual author, not the result of repetitive, conservative, passing down of a community story. As a group, we humans will anthropomorphize the animals only so far. Giving them a hat might be too much.

The sun is setting and I dare not be close to the Magic Forest at night.  I will let my thoughts on Puss in Boots slip below the horizon as well.