I’ve become aware that I live for this time of the evening, these moments when I sit in my study awaiting the padding of footsteps down the hall. I know Thalia will grow up, shed Teddy, shed me, and shed the magic that surrounds the both of us. Will I be able to live again in the mundane world?

My study door creaks open. Thalia is in her favorite nightdress, the hem of which touches the floor, picking up its gray dust and grime. Teddy, dragging behind her, does his duty by cleaning a swath of the floor.

“Nooooooo! Read me the second last.”

I of course relent.

The second last story in these latter-day full collections of the Grimm stories is the overlooked Prince Swan. A maiden is approached by an enchanted prince in the form of a swan, who declares he will marry her if she will unravel the ball of yarn to which he is attached as he flies off to his kingdom.

This she does for an entire day, but just before the last of the yarn is untangled, it catches on a thorn bush and is broken.

Looking for food and shelter, the maiden comes to a house where an old woman answers the door. The old woman helps the girl, but warns that her husband is a cannibal. The husband returns home, smells the girl, and catches herl. The old woman talks him into saving the girl for breakfast. Before dawn the old woman, who identifies herself as “Sun”, gives the maiden a golden spinning wheel and sends her on her way.

The girl encounters two other old women with cannibal husbands, from whom she gets a golden spindle from the one named “Moon,” and a golden reel from “Star.” Star also tells the maiden that the spell over the prince has been broken by the girl’s efforts despite the mishap. However, he is now a king, has married a princess, and is living atop the Glass Mountain guarded by a lion and a dragon. Star gives the maiden bread and bacon to feed and placate the beasts.

Thalia giggles about the bread and bacon.

At the castle gate, the maiden uses her golden spinning wheel, attracting the attention of the queen. The maiden trades the wheel for a night in the chamber next to the king. There she sings the song of her travail, but the queen has drugged the king to sleep.

The girl trades the other devices for more nights in the chamber, and is able to fool the queen on the third try. The king hears the song, and puts aside his queen to marry the true bride.

“That’s sorta like Sprig of Rosemary.” Thalia knits her brow.

“And a little like Jack and the Beanstalk, ‘Fe, fie, fo, fum. I smell the blood of an Englishman.’”

I have questions. Fairy-tale questions. Questions with deep roots in my psyche. Yet I have not the words to express them. Images imbued with distress flicker through my head, but nothing more concrete.  When I find myself popping popcorn, I then know what I intend.

Clutching a bag filled with still warm, fluffy kernels, I enter the Magic Forest at dusk, never a good idea. I know the way to the nixie’s pond despite the gloom.

“Hello, my human.” The nixie emerges from the water to sit upon her rock.

“Hello, my nixie.” I toss her a popped kernel that she catches with her webbed hands, then savors.

“Have you read the story of Prince Swan?” I ask.

“Your books do not do well under the water. Tell me the story.”

Even the immortals like to hear a good story.

When I finish she responds, “Of course I know the story. It is an old tale of human carnal love.”

“Carnal,” I say, while methodically throwing her popcorn. I think it keeps her at bay, and from dragging me beneath the water’s surface. Popcorn does not do any better under water than books.

“Carnal,” I repeat. “That is a base way of describing what we call ‘true love.’ ”

“Ah, true love, there is a mystery for us immortals. We know pleasure, but you mortals take more from knowing each other than we do.”

I toss her another kernel and she continues.

“Your maiden meets her prince, but not in his human form. Yet, her heart goes out to him at once, unconditionally. Explain that to me. Why does she travel to the sun, moon, and stars to reclaim a thing she never had? What did she think her chances were?”

“Her chances were always good,” I say. “She was connected to the prince through the symbolism of the yarn. The longer it traveled outward, the more connected they became.”

“But when the yarn broke, did not that all go away?” The nixie frowns as she nimbly catches another kernel.

“No,” I say. “It is only the inciting incident for the hero’s journey, or in this case, the heroine’s journey.”

“Yes,” her green eyes flicker. “You mortals are always searching. I don’t sense you are finding. Do the tales give you restless beings an illusion of closure? That is to say, somebody has found?”

She may have something there.

“We do like happy endings, but it is the search that is important. We take clues from the hero or heroine’s search and apply them to our own search, however imaginary that might be.”

“But why make the journey? If you want love so badly, why not love the next enchanted prince who blunders by?”

I keep the popcorn coming as I consider.

“We,” I finally answer, “like to think there is only one person we are meant to love, and when we find that person, we need to follow them down whatever path they travel.”

“And what happens when you get to the end of that path?”

“I don’t know. The path never ends, if we ever get to travel it.”

The nixie’s green eyes narrow. “How often do your people get to meet this one and only love?”

“That varies. Some of us never, others frequently.”

The nixie sighs. “You mortals are hopeless.”

“Perhaps that is what the fairy tale is about,” I say to myself.

Fairy Tale of the Month: May 2016 Prince Swan – Part Three 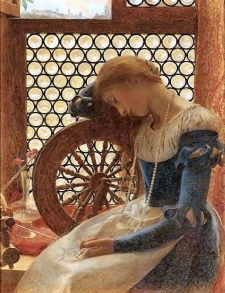 My bag of popcorn is half empty, but I know I have not asked the question for which I have no words. The nixie’s eyes penetrate mine. She knows another question lies within me.

I almost hear a bubble burst in my thoughts and words flow from my mouth. “Where can I find the soul of a fairy tale?”

Is that the right question?

The nixie frowns. “You speak in Christian terms. Rephrase your question.”

I think I may have offended her. There is much that is Christian in the tales, but it is a gloss put upon them by Christian writers. At their heart the tales are pagan in nature.

“Where,” I start again, after a few more tosses of kernels, “is the spirit of the fairy tale to be found?”

“Ah, there is such a place. I can take you there.”

I sense the danger in that. “Tell me of it, instead.”

She smiles wickedly, but tempts me no further. “You do not need me as a guide. You have probably been there, but it is hard to remember such visits. Many a storyteller visits the spirit, if only for a fleeting moment while their bodies remain in a tavern, a workroom, by a family hearth, or near a fire in a Bronze Age hovel. Most commonly, you mortals visit from a place we immortals cannot tread—your dreams.”

“Motifs,” I blurt. “If the tales came from one place, then so do the motifs, those pieces of a tale that come up again in story after story, as in my Prince Swan: the women with cannibal husbands, those very women being the sun, moon, and stars, and the frequently-appearing spinning wheel.”

The nixie nods in confirmation. Another bubble bursts in my thoughts. “If there is but one spirit, is there but one true story, one complete fairy tale?”

“There was.” The nixie holds up her webbed hand for more popcorn. For my life, I’d forgotten to throw her some during my reverie.

“In the beginning,” she says between bits, “there was only one fairy tale. I knew it then. It took a mortal’s lifetime to tell it.

“Now it has come apart, flake by flake, falling to your plane of knowing in perfect little symmetries, leaving behind its spirit. I do not know where all the flakes have fallen, although when I see them, I recognize them.”

“Can the story be pieced back together and made whole again?”

‘Why would you want that? The weight of the whole story might crush you. Take what little wisdom it gives you when it melts on your tongue and be content.”

“No.” I hold back the popcorn on purpose. “I want to know the whole of it, hold it in my hands, as it were.”

My popcorn bag is nearly empty. I throw her the last of the kernels.

“Well then, my nixie, take pity on a poor mortal who wants to know the ultimate story, but apparently cannot.”

“Pity is not one of my abilities. You need do that for yourself.”

I should have known and I shall.