“Rats?” Thalia squirms in my lap.

We are reading, The Pied Piper of Franchville, from More English Fairy Tales, by my acquaintance—via Miss Cox’s garden—Joseph Jacobs. It is the first story in that collection, and varies in interesting ways from the more familiar Hamelin version.

Franchville, or Newtown nowadays, sits on the Isle of Wight, a sleepy little town, our story says, upon the Solent shore, the waterway between the English mainland and the isle. A plague of rats settled on the town, spoiling their food, squeaking louder than the gossips, and overwhelming the cats.

A stranger, dressed in all the colors of the rainbow, appeared before the mayor’s council, suggesting he could get rid of the rats. He and the council came to the agreement of fifty pounds for wages, a sum destined never to be paid.

He led them to the end of Gold Street, which empties onto the shore of the Solent, and got into a small boat that drifted out on the tide, drawing the rats into the water and to their deaths.

Returning later on the tide, with not a rat left behind, he found no payment. This time when he piped his tune, he walked up Gold Street and down Silver Street, and on into the greenwood, drawing the town’s dancing children behind him, all never to be seen again.

Thalia giggles. “Wait, isn’t that supposed to be Hamblin or something?”

“Hamelin, and right you are.” I am ready for this and reach for my Robert Browning’s version of the Hamelin story, which I have placed on my side table.

They fought the dogs and killed the cats,

And bit the babies in the cradles,

And ate the cheeses out of the vats,

And licked the soup from the cooks’ own ladles,

Made nests inside men’s Sunday hats,

And even spoiled the women’s chats,

By drowning their speaking

With shrieking and squeaking

In fifty different sharps and flats.

I read the whole piece through to Thalia. She sits in my lap agog while I speak, then remains still, holding her Teddy, her eyebrows giving away that she is thinking.

I make my guess as to what rolls around in her thoughts. The sound made around the noble cause of honesty—paying for services rendered—that this story trumpets, does not entice the ears of my granddaughter. It is a foil for another noise, that of the seductive pipe, luring youth toward an undefined ideal, a sound that the mature cannot hear. Both children and rats, Thalia and I, are pulled in by the pure.

The bell to Augustus’s store rings above my head as I quickly slip through the door to keep the February cold from intruding into the aromatic haven that is my friend’s tobacco shop.

Augustus pokes his head around the door frame to his testing room and waves me to come over. A little to my surprise young Duckworth is there, occupying one of the comfy chairs. He and the proprietor are filling the room with a dense vanilla-scented smoke. I pull out my pipe and soon add to the cloud.

“Well,” says Duckworth, “with the two of you fairy-tale enthusiasts in the room, there is no avoiding The Topic. Let’s have out with it. What’s it to be?”

“The Pied Piper of Franchville,” I say.

“Franchville?” Duckworth looks quizzical. “You mean Newtown? I have a client there.”

“I hope you cited Grimm’s version for Thalia,” says Augustus. “They speak of its origin in Hamelin.”

“I fell back on Browning. I looked through Grimm, but it wasn’t there.”

“You weren’t looking in Deutshe Sagen.”

“Ah, the legends, how silly of me.” I perceive Duckworth has lost interest in our conversation and is entirely taken up with the small screen of his cell phone.

Augustus continues, “The Grimms are precise about this event. They give the year as 1284 and that one hundred and thirty children were led away by the piper. After getting rid of the rats and not getting paid, the Pied Piper left, then returned on Saint John and Saint Paul’s Day, dressed in hunter’s green, wearing a strange red hat, and abducts the children into Koppenberg Mountain.

“My goodness,” interrupts Duckworth, “but there’s a lot of history to it.”

I realize he is not checking his email.

“It says here,” Duckworth goes on, “the first record of the abduction was represented in a stained-glass window of a local church about 1300, showing the colorful piper and dancing children. Hmmm, goes on to say that the rats were not part of the story until 1559.”

“Why then,” I ask, “would the piper take the children if there were no rats to be gotten rid of and no payment not to be made?”

Duckworth rhythmically draws his finger up the side of his screen. “Well, there’s a section here on the emigration theory that suggests illegitimate and orphaned children were sold to recruiters from Eastern Europe, who were looking for bodies to resettle places like Transylvania, which had been depopulated by the Moguls.”

Duckworth studies his screen as Augustus and I look on.

“A little less ominous,” he continues after a bit, “there’s a professor Udolph writing about lokators—recruiters again—talking unemployed youths into colonizing part of Poland, after the battle of Bornhòved, where the Germans then held sway.”

Duckworth’s phone chirps and he taps it a few times. “Oh, I am going to be late for an appointment. Augustus, I’ll be back tomorrow to buy a few ounces of this new mix. What’s it called?”

Augustus thinks a moment. “Piper’s Melody, in honor of our conversation.”

We soon hear the bell chiming over the shop’s door as Duckworth departs.

“I am going to have to get me one of those,” my friend muses. 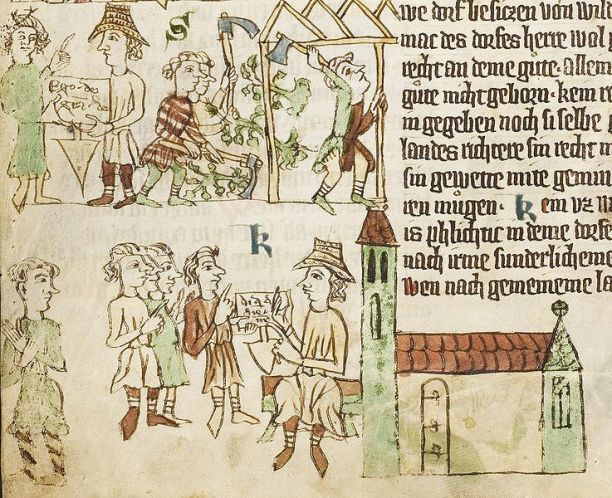 From a manuscript depicting a lokator.

A loud crackle of burning log coming from the hearth that warms my study, nods me out of sleep. The comforting heat, along with my glass of scotch, keeps me from focusing on The Topic, as Duckworth aptly put it.

My laptop is on its wooden stool before me. I, of course, am in my sleep-inducing comfy chair, trying to pursue two possible notions: that the Pied Piper of Hamelin is a reflection of the Children’s Crusade and/or the Black Death.

I spot Thalia’s cat curled up near the fireplace.

“Johannes,” I say to him, “what do you think about the Pied Piper and his rats?”

“How’s that?” Johannes glares with suspicion.

I reach for Robert Browning again.

They fought the dogs and killed the cats . . .

His eyes round. “Fake news!”

I fear I have touched a nerve and turn my attention back to my laptop.

I am taken with the idea that the story of the Pied Piper can be connected with the Children’s Crusade.  That movement is described as having two origins, one started by a French shepherd boy and the other by a German shepherd boy. They intended to go to the Holy Lands and convert the Saracens peacefully to Christianity. It appears to have attracted thousands of youth, none of whom made it to the Holy Lands.

Some traditions have it that they were sold into slavery by Italian merchants who proposed to ship them to their intended destination after the sea did not part for them as predicted.

My notion seems plausible until I compare the dates. The Children’s Crusade took place in 1212 and the Hamelin event in 1284. Given the average medieval life span, the events are two or three generations apart.

I glance up to see Johannes has turned his back to me and resettled in front of the hearth.

My idea that the Pied Piper represents the Black Death is more probable. The story, as we now know it, didn’t come together until 1605, collected by the English antiquarian Richard Rowland Verstegan.

Interestingly, he gave the date of the Hamelin event as 1376, which is the year of a rat plague. This is highly suggestive that he, or the folk from whom he collected the story, had conflated the 1284 disappearance of the children of Hamelin with the later plague of rats. Could the memory of the 1351 Black Death be the catalyst for the fusion of the rats with the children?

I really think I have something until I research the bubonic plague. As I try to ignore the completely frightful pictures of the victims, I discover the association of the disease with rats was not made until the late 1890s. At the time the story of the Pied Piper came into its present form, the people still thought the plague was brought about by bad air, the wrath of God, or maledictions of the Jews.  Rats were not yet part of the Black Death story.

Two enticing notions done in by the facts.

2 thoughts on “Fairy Tale of the Month: February 2017 Pied Piper of Franchville – Part One”