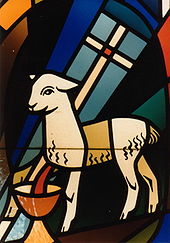 As Melissa and I enter the garden, we see Miss Cox has thoughtfully set out two cups and a pot of tea, the latter wearing its cozy against the March chill. We approach a wrought iron table in front of a welcoming bench; Melissa takes off her gloves to pour us both a cup.

Her mission to Miss Cox’s garden today is to speak to Jens Kamp about a story he collected, The Golden Lamb of God. It is a fairly extraordinary story in its collection of story motifs. The tale manages to shoehorn in the motifs of the three brothers, three giants, three witch sisters, seven years of capture, seven-league boots, twelve swans, magical apples, magic tablecloth, hat of invisibility, transformation potion, epic journey, hidden heart, glass mountain, and a dragon. Not to mention a king, princes, and princesses.

This long tale starts with the king’s special apple tree, one that bears fruit that never rots, which, on one midsummer’s night, are stolen from the boughs. Every midsummer’s night after that the theft reoccurs.

The king requests his eldest son to stand guard, and the next year the middle brother to stand guard, but both are frightened away. The youngest brother, in his turn, digs a hole in which to hide—shades of Sigurd and his dragon—from where he watches twelve swans alight, shed their feather cloaks, turn into beautiful women, and strip the trees of their fruit. The young prince steals one of the feather cloaks, capturing the youngest girl, getting from her the truth.

She and her sisters are princesses controlled by a dragon, who killed their father and turned his castle, called The Golden Lamb of God for the seal over the castle door, into a glass mountain. It has been six years, and by the seventh year there will be no possibility of escape from the dragon’s clutches.

The prince returns the feather cloak when he realizes the girl will die if he does not.

The next day the prince sets off to find the castle called The Golden Lamb of God. He tricks three giants, who are arguing over their treasures, and steals from them their hat of invisibility, a magic tablecloth, and a pair of seven-league boots.

Using the boots, he stumbles across the underground home of an ancient witch, whose home can only be entered through the chimney. Using the magic tablecloth to produce a feast, he comes into her good graces. Besides being a witch, she is the Queen of the Animals, and calls them together to see if they know where to find the castle called The Golden Lamb of God.

The animals do not know, but still the witch helps the prince by giving him a letter of introduction to her older sister, the Queen of the Fish, and by providing a billy goat as a guide.

The same scenario plays out, underground home and all, with another letter of introduction, and a small dog as guide to the eldest sister, Queen of the Birds.

The third sister, unlike the others, lives in a common witch’s hut, and this time the prince leaves with the gift of a potion to turn himself into an ant, and an old grey falcon as a guide, who knows the way to the glass mountain.

In the form of an ant, wearing the hat of invisibility, the prince crawls through a crack in the glass mountain to find the youngest princess cooking the dragon’s meal. She tells him she is about to be married to the dragon.

The prince vows to kill the dragon, but it cannot be destroyed unless they can find its hidden heart. Through trickery and deceit, the girl gets the dragon to tell his soon-to-be-wife that it is hidden in an egg, inside a duck, down a well, inside a locked church, on an island five thousand miles away.

The prince, overhearing the dragon, is soon off on another sojourn with the help of the old grey falcon, to return with the egg, and no, the duck does not fare well in the adventure.

They accidentally encounter the dragon on return, and the falcon flies up high, dropping the egg. The dragon flies after it, but too late. As the egg shatters, the dragon dies and the glass mountain turns back into The Castle of The Golden Lamb.

Fairy Tale of the Month: March 2017 The Golden Lamb of God – Part Two 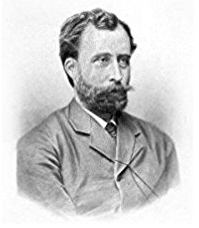 Jens Kamp’s appearance disappoints Melissa and me. He is disheveled, glassy-eyed, and a bit unsteady. He plunks himself down on the bench with us, without introduction, staring about himself, but not at us. I realize Miss Cox put out two cups for tea, not three. In whatever manner Miss Cox knows these things, she knew he was not a teetotaler.

I suppose we can excuse him; he did come to a sad end. Jens was a lifelong collector of Danish folklore—from stories to riddles—yet his publications never achieved popular success. Most of his career was spent as a high-school teacher. Two years after his marriage to a carpenter’s daughter, she suffered a mental breakdown and was confined to a hospital for the rest of her life. Neither was Jens mentally stable.

Eventually sacked from his last teaching position, he lived his final years in reduced circumstances. Only much later did scholar Peik Hoppe and translator Stephen Badman bring him some due recognition.

“Sir,” Melissa gets his attention. “I have a few questions for you concerning the story you collected, The Golden Lamb of God.”

Jens blinks, brightens, and focuses on Melissa. She continues.

“The tale is made up of many parts: the disappearing apples, the gaining of magical devices, journey from witch sister to witch sister, and the hidden heart.”

“From whom did you collect this tale?” I sense a little suspicion in Melissa’s voice.

“My notes attribute to a carpenter’s wife, but this tale—tales like it—I hear all over the little isle of Bogø.”

“Did you edit them?”

Jens looks a little uncomfortable. “I,” he pauses, “took a little from each to make a whole.”

Melissa puts on her worried look—the one I have become familiar with when she takes me to task.

“I was a bit stopped,” she says, “when the witches gave the prince letters of introduction. I felt that was a mark of elitism, outside a peasant’s usual frame of reference, the peasants being the tellers of this tale.”

Jens chuckles. “Well, my hero is a prince. Why should he not have a letter of introduction?”

I sense that Melissa suspects Jens of author intrusion into the tales he collected. Those letters of introduction struck me as odd as well.

A Letter of introduction was an eighteenth and nineteenth century device, somewhere between what we now see as networking and a résumé. Among the upper classes, a young man, who might want to move into a greater social circle than the one he occupied, would ask a gentleman of the highest social status whom he could approach, to write for him a letter of introduction to a third party, whom the first party (the youth) wished to make acquaintance.

There was much etiquette surrounding this letter. For example, the third party had to be a person of social standing between the first party and the second party, and not one clearly above the status of the first two parties. Then there was the issue of whether the letter was sealed or not sealed; that is to say, was the bearer aware of the letter’s content. (There is a letter of introduction by Benjamin Franklin that is mildly insulting to the bearer.)

In any case, I never heard reference to a letter of introduction in any other fairy tale. I think Melissa’s suspicion may be well-founded.

Fairy Tale of the Month: March 2017 The Golden Lamb of God – Part Three 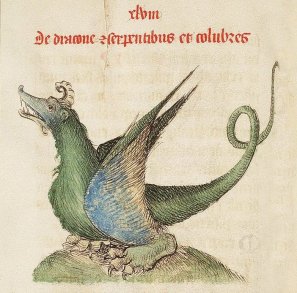 “Dragons,” says Melissa, “You know, there are surprisingly few dragons in the fairy tales, almost as rare as fairies.”

Jens points to her and laughs. “Yes, yes,” and slaps his knee.

“And,” she continues, “putting a dragon and a glass mountain together? That I never heard of before.”

Jens takes a contemplative breath. “The combinations of motifs are infinite. The motifs are the ingredients of a recipe for a meal for the ears. As some will never tire of eating the same favorite dish over and over, I will listen to the same stories till the end of time.”

Jens waves a hand in the air, invoking another thought. “There is, somewhere in the language of fairy tales, an indistinct rumbling of dissatisfaction—perhaps my own—that resolves with the ending of the tale. When the tales stops, there is that moment of quiet. It is that little moment of quiet I live for.”

I wish I knew what he is talking about.

“But, as for the dragon,” Jens refocuses on Melissa’s question. “It is true, they are rare. There may be fifty tales without a dragon for every one that does have such a creature. When they do appear, they are evil, can talk, and are a little hard to distinguish from the devil.

“Dragons demand princesses as sacrifices, and the poor girls are left alone, sometimes chained, to face the monster. I know of an English tale where the princess is turned into a dragon to isolate her.”

“In your case,” comments Melissa, “there are twelve women being isolated.”

Melissa pursues the point. “But why the seven years before they are totally without chance of rescue?”

Jens’ brows knit. “That I do not know. I can make a guess. Seven is the most common number in the Bible: seven years of plenty, seven years of drought; Solomon’s temple took seven years to build.

“But seven years is also the common length of an apprenticeship. The dragon sent them out to do the chores of collecting apples. The youngest cooked for him. They did live in his house like apprentices live in their masters’ houses (albeit the house stolen from their father). The princesses’ condition has the same feel as those of apprentices, who were often badly treated. But those are only my wild guesses.”

“What struck me oddly,” I say, “were the two witch sisters living underground with their entrances through the chimneys. What is that about?”

Jens’ attention fades away from us. He looks about him, rises from the bench, and wanders away without excuse.

Melissa looks after Jens Kamp disappearing out the garden gate. “I guess we’ll not find out from him.”