I woke up in my house this morning, alone. Thalia and her mother are taking a few days of vacation down on Brighton Beach. I’ve stayed behind to make sure Johannes is fed. He lies on the window seat, ignoring his dish. Nor do I see the fairy about. She is probably hiding in Thalia’s suitcase in Brighton.

To make matters worse, Melissa is visiting a sister and Duckworth is off on a business trip.

I ran some errands today, half of them unnecessary, then thought of making an elaborate meal for supper as a way of entertaining myself, but cooking for one is difficult in a way. I made a meal of Nutella and crackers, then poured myself a large brandy.

I stand in front of one of my bookcases, brandy in hand, wondering what I am looking for. I run my finger across the spines of my books, pausing on one I have not read, More Greek Folktales, by R. M. Dawkins, one of the books Melissa insisted I buy.

I tip the book from the shelf, sit on my comfy chair, open it to the table of contents, and, Thalia-style, whirl my finger in the air and bring it down on the page.

A young girl, Polly, encounters a bird every morning on her way to school, who says to her, “Sew your seams or sew them not, a man who’s dead shall be your lot.”

One Sunday, Polly goes off with friends to gather herbs. The gaggle of girls spot a palace they did not expect to see. When they try to push open the door, only Polly can open it, and the door shuts firmly behind her.

She finds three men lying dead, and in the next room three more. In the third room, on a bed, lies a dead prince. However, in his hand is a paper with a plea that someone mourn for him for forty days.

This she does for thirty-nine days without sleep. On the next day, a gypsy woman appears and offers to spell the poor girl and

let her sleep a little. Innocently, Polly falls for the ruse.

When the prince returns from death, along with the other occupants of the palace, he finds the gypsy mourning for him and determines to marry her. The gypsy assigns Polly to tend to the geese.

One day the prince is obliged to travel and offers to bring back something each of his servants desires. Over the gypsy queen’s objections, the goose girl asks for a stone of patience, a knife of slaughter, and a rope of hanging. Failing that, may the sea beneath him turn to stone.

Failing to purchase these three strange items, the sea under his returning ship turns to stone. The merchant who then sells him the three items, tells the prince to watch what Polly does with them.

This he does and sees Polly try to hang herself with the rope of hanging, but the stone counsels patience. She explains to the stone how the gypsy cheated her. Then she attempts to stab herself with the knife of slaughter. The stone again says, “Patience, patience.” Polly’s explanation is repeated. This time the prince prevents her from harming herself, declaring she is the true bride.

He then asks his false gypsy bride what is to be done with someone who separates a man from his wife. She suggests that “he” be cut up into little pieces and each piece nailed to every door in the city. She is, of course, pronouncing her own fate.

“What a mixture of known motifs and strange elements.” I declare to the air, causing Johannes to stir. “I hope Augustus is not on vacation. I need to talk to someone about this one.”

Fairy Tale of the Month: July 2018 The Prince in a Swoon – Part Two

It is a rainy afternoon, but I am happily seated in Augustus’s windowless “testing room,” he and I luxuriating in the tobacco cloud we are creating, forgetting for a moment the rain clouds outside.

We have been here long enough for me to relate to him the essentials of The Prince in a Swoon. Augustus puffs on his pipe, contemplating the tale before he speaks.

“The Greek folktales have their own colour,” he states.

“Could be a fairly modern intrusion into the tale,” I suggest.

“Then one Sunday, she goes out collecting herbs with her friends.”

“Hmmm,” I consider. “That’s not a Grimm thing either.”

“I really like,” says Augustus, “that only she can open the door, then it immediately traps her inside, not that she has any thought of escape.

“The three dead men,” Augustus rolls on, “are not sleeping, but are deceased. Although the story title uses the word ‘swoon,’ the tale has the prince mourned for forty days, suggesting death is involved.”

“Is death that far from sleeping that we should make a distinction?” I question.

“Nor,” I continue, picking up the dropped thread, “do we learn why the prince and his palace were embraced by death, and then released by the forty days of mourning.”

“And,” Augustus raises a finger, “here we come to the number forty, which puts this tale in that part of the world.”

“Ali Baba and the Forty Thieves, and the Forty Fortunes.” Augustus regards his pipe while his mind wanders. “Greek philosophy, through the Romans, gave us our Western culture, but the Greeks, themselves, feel closer to the Middle East than to Europe.”

“Ah,” I say, refilling my pipe with an Augustus blend he calls Old Rinkrank, “but when she is tricked by the gypsy, she ends up as a gooses girl, which is very Grimm.”

“You’re right,” Augustus nods. ‘There are two goose-girl stories in the Grimm canon, giving this tale a smacking of European influence. Our story, if not all of the Greek folktales, lies between two cultures, that of the East and that of the West.

“But what follows in the tale interests me the most.” Augustus pauses to refill his pipe, then launches back to his point. “When the prince offers to bring gifts to his servants, Polly asks for a rope of hanging, a knife of slaughter, and a stone of patience.”

“Hmmm,” I contemplate, “When Beauty, in Beauty and the Beast, asks for a rose from her father’s travels, there is innocence in the request. In Polly’s request there is forethought or foreshadowing?”

“I like foreshadowing,” says Augustus. “Our tale moves from the usual situation and response—the door closes behind her and she explores the palace—she finds the prince and his note, then mourns for him—and moves into the mystical, unaccountably asking for two instruments of death and one of hope.”

Augustus blows a few smoke rings before continuing. “I can’t help but feel she is performing a morality play for her prince. She has her cast of characters, the rope, the knife, and the stone, the stone having its lines to speak.

“She performs her complaint twice, once for her prince to hear, and a second time for him to understand; these princes can be a little dense.

“In the end, I see a morality play in which she well could have killed herself, a performance art to the ultimate.”

I do need to consider this observation.

Fairy Tale of the Month: July 2018  The Prince in a Swoon – Part Three 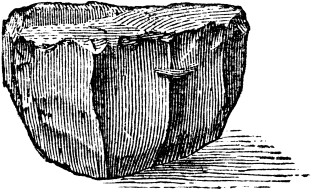 Guess Who
Before sunset there came respite from the rain that has been falling all day. I have taken advantage of this pause to ramble through the Magic Forest. I have half a mind to visit the nixie, but I haven’t brought any popcorn. Instead, I wander to the foot of the Glass Mountain.

There, on a crystal ledge, not ten feet above my head, is a wizened, elvish figure of a man, glaring at me. He is seated on the ledge, his knees sticking out from under him, almost looking like the tips of wings. A more crooked nose, I’ve never seen.

“Is that you, Old Rinkrank?” I marvel.

“Who else would it be?

You evoked my name.

I cannot be free

Till you make your claim.”

“Evoked your name? I did nothing . . . “ I look at my pipe. I am smoking the blend that I have been puffing on all day, which Augustus playfully named Old Rinkrank. “Oh, I see.”

Of brains he needs some.

How dense can he be?

What is your question!”

This last he shouts at me.

“Let’s not get huffy,” I say. “I do have a question. In the fairy tale The Prince in a Swoon, the heroine, Polly, asks for a rope of hanging, a knife of slaughter, and a stone of patience. My friend Augustus suggests she is performing a mystery play. What might you know of this matter?”

Not one for folly.

If life’s but a stage,

If not paid a wage.

The stone of patience

To the hanging rope

And knife of slaughter,

Her death an offer.

Peek through the keyhole

She pours out her soul

To a thoughtful stone.

Maybe give a nudge

To thoughts that are wise.

The prince in hiding,

Quiet as a thief.

The words that he heard

And how she suffered

When the gypsy lied.

The stone, oh the stone,

It kept her alive.

Made her story known

“That,” I say, “reminds me of Grimms’ Goose Girl, when she pours out her sorrows to an iron stove, with the old king listening at the stovepipe.

“Am I your World Book?

Don’t give yourself airs.

Tend your own affairs.”

Old Rinkrank engulfs himself in a cloud of foul-smelling black smoke and is gone.

“Ornery,” I say to myself, tapping out my pipe. “But I may evoke him from time to time.”