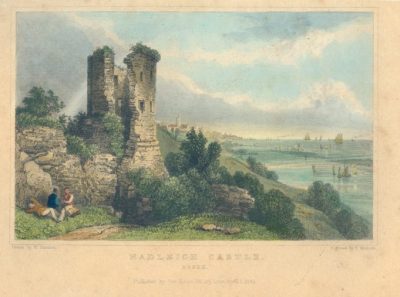 Thalia, Melissa, and I are on a ramble. It started when I

confessed to not having seen the sea this year, instead having stayed home to feed Johannes when Thalia and her mother went to Brighton.

“Oh my dear,” Melissa had exclaimed. “One should always take at least a moment to spy the ocean annually. The sea is the heartbeat and rhythm of life.”

At her insistence, we three are now in Hadleigh Country Park, overlooking the Thames Estuary, rather close to the ocean.

Boldly, we spread our picnic blanket at the foot of one of the ruined towers of Hadleigh Castle and take in its spectacular view of the Thames flowing to the sea.

Our outing is all contained in a bulky rattan basket Melissa has lugged to the tower’s base. Pulling back the cane pins, she opens the lid and pulls out a book. I recognize it. Folk and Fairy Tales from Denmark, Stories Collected by Jens Kamp. It’s a translation by my friend Stephen Badman.

“Here is our first feast,” Melissa declares, opening the book to its bookmark. “How Idle Lars Won Himself a Princess.”

Thalia and I settle back to listen to Melissa’s contralto voice.

Idle Lars had an exceptional talent for laziness. When Lars was an infant, wherever one put him that is where he would be whenever you next saw him. He would not entertain the notion of crawling away to explore.

One day, through much effort and many threats, Lars’ mother got him to fetch water from the communal well. He took with him an old pot with its legs broken off and every little while he turned it upside down to rest upon it.

The princess, sitting at her castle window, noted his slow progress and called out to him, cautioning him that his legless pot might outrun him, and would he need a boy to push him from behind on his return trip. That annoyed Lars, but he made no answer.

At the well, his pot scooped up a tiny frog that pleaded with Lars to pour him back into the well.

“No,” said Lars, “I cannot be bothered to tip you out. I’d have to fill the pot again.”

The frog promised to grant him a wish. Lars, if lazy, was no fool. He cast his broad-brimmed hat upon the ground and wished for as many wishes as his hat covered blades of grass.

His next wish, with which he thought to spite the princess, was that his pot should sprout legs. It did, and started walking home. The princess was delighted at the spectacle, but called down to Lars that he still needed a boy to push him along to keep up with the pot.

Lars grumbled, “I wish you had a boy yourself.”

It was a thoughtless thing for Lars to say, but nine months later she did have a boy. She proclaimed her innocence, but to no avail.

When the boy could walk, the king called all the men in the kingdom together—including Lars, who, in the meantime, had not bothered to make another wish. The king gave the boy a golden apple saying, “Whoever you give this apple to, will be recognized as your father.”

Although Lars stood in the back of the crowd, the child sought him out and gave him the apple. Infuriated, the king had Lars and his daughter cast out to sea on a boat to meet their doom.

Here Melissa dramatically gestures toward the Thames flowing placidly below us.

Lars lay on the deck, seasick, while the princess wept and complained until Lars exclaimed, “What do you want me to say, other than I wish we were back on dry land?”

Instantly they were. The princess put two and two together, and realized things were not as bad as she had thought. She took charge of the wishing and had Lars wish himself to be a normal human being and not a self-centered, stupid, lazy oaf. That was transformative. She then went on to have him wish for royal creature comforts such as a castle, some servants, an army, and a decent wardrobe for both of them.

The next morning the king awoke and looked out his window to see an island and a castle that had not been there before. He goes to the island to be greeted by an honor guard, at the end of which is his daughter and a transformed Lars. Befuddled, but pleased, he says, “What will be will be.”

That declaration is followed by a happy, three-day-long marriage feast.

Thalia and I are content with the story, but I wonder what else is in Melissa’s wicker basket.

Fairy Tale of the Month: August 2018 How Idle Lars Won Himself a Princess – Part Two 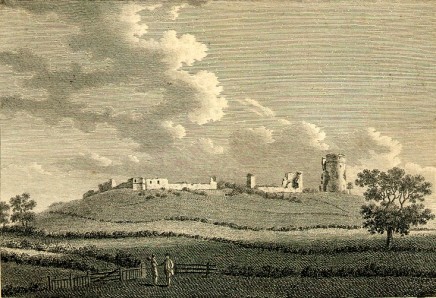 Next from Melissa’s basket appears a bottle of claret, two wine glasses, a small jug of sarsaparilla, and a sturdy cup. Thalia’s eyes glimmer at the soda as Melissa pours it into the cup, sending its strong, sweet smell lofting in the air, along with Thalia’s giggle of delight.

“The protagonist in your tale is Lars,” I say, “but it’s a woman’s story isn’t it?” I take the glass of claret she offers me.

“That element of the princess taking charge does attract me to the story, I will confess. This one in particular has its charm. The Danes have a generally positive view on women. It seems,” she observes, “different countries hold their women to different standards, as least as they are reflected in the fairy tales.”

“The local tales,” I say, “are probably a rather good barometer of a country. What are your perceptions?”

“The Germans, I’ll say, are the hardest on their women, if we accept the Grimms as representative.” She swirls the dark, red wine in her glass. “In the Grimms’ canon there is the story King Thrushbeard and among the Irish tales The Queen of Tinkers. It’s the same story, but in the Grimms’ version the princess must be humbled. In the Irish tale she must be strong.

“Did you know the Germans never had a regent queen? The English had Queen Elizabeth, who absolutely defined her era. The Russians can boast of Catherine the Great. Germany, when it comes to speaking of it famous queens, we hear crickets chirping.”

Melissa pauses to bring out a cheese board, a block of Stilton, water biscuits and a small jar of blueberry jam from her epicurean basket. The jam, in particular, attracted Thalia’s attention.

Dipping a slice of cheese into the jam, I question, “Why do so many of the female protagonists in these tales end up getting married in the course of the story?”

Melissa sips her wine, contemplating. “At the time these fairy tales took the shape in which we now find them, there was not a lot of social mobility, and virtually none for women. Their marriage would determine their status. So, I’ll suppose young women’s future marriage was very much on their minds.

“On the other hand,” she continues, “in the fairy tales, the heroines never start out to find husbands. Husbands happen to them, such as in How Idle Lars Won Himself a Princess.”

Melissa opens her basket again and produces a covered bowl of mixed nuts. The lid removed, I spot a fat macadamia nut and pick it out as I say, “You have prompted a thought in me. You said, at the time, there was little social mobility. I infer from that there was little status change as well. But frequently the tales, as in our tale’s case, are about change in status; the oafish Lars becomes a king. It seems to me that goes beyond wishful thinking into the impossible.”

“But that’s the fun of it!” Thalia joins in, “Dreaming the impossible.”

I suppose she is right.

Fairy Tale of the Month: August 2018 How Idle Lars Won Himself a Princess – Part Three

From the magic basket comes Melissa’s Curried Chicken and Pasta Salad, one of her no-fail crowd pleasers. I am delighted but I watch Thalia eye the offering suspiciously. She tastes it. Her brows knit, then she takes a second bite. I am proud of her. A child willing to venture beyond macaroni cheese as a culinary delight shows promise.

While staring up at the ruined tower of Hadleigh Castle, its ancient stonework sheltering us from the sun, Melissa comments, “I do notice a gender pattern in the tales concerning status. In the course of the tales young women fall from their status to a lower status, then struggle to return to that position or, in some cases, a higher one.

“In our story the princess is cast out to sea with Idle Lars to meet their fate. She turns it around to restore her position and bring Lars around to decency.”

I nod in agreement, my mouth full of pasta salad, so Melissa continues. “Men may start out as farm hands and rise to become kings. Lars is a selfish, idle oaf and wins himself a princess. There is no fall from grace with the men.”

Fall from grace,” I echo. “What does that say about how we perceive the roles of men and women in society?”

“Exactly my point,” says Melissa, taking a moment to nod to Thalia. “Women are at a disadvantage. They fight to maintain what they have. Men get to venture forward. Women who are on the road were forced out or are fleeing. Men are on the road to seek their fortunes.”

We watch a container ship, in silent effort, slowly, laboriously work its way up the Thames Estuary headed for the Port of London.

“In our story,” I return to the subject, “what about the disappearing child? When his mother and supposed father are cast out to sea, does he go with them?” I let a little false shock enter my voice.

Melissa, smiling, claps her hands once at my humor. “You have addressed the economy of characters so common to the fairy tale. Of course we don’t know what happens to the child. He has played his role and since he no longer forwards the story, he disappears. Though a prince he may be, he no longer shows his face.

“Also in our story, he is not the first to meet that fate. Lars’ parents are given no better. Lars’ father is mentioned at the start, so we know Lars had a recognized father. (Lars’ parentage of his son is not so clear.) Lars has a conversation with his mother, who sends him to the communal well, but after that she is no longer part of the story. Even when Lars is transformed into a decent human being and becomes king, there is no mention of him inviting his parents to live with him and his wife in the castle. Some tales will extend that courtesy, but they are usually French.”

“Fathers,” I say, finishing off my salad, “suffer the most from what you call the economy of characters. The notable exception is in Hansel and Gretel, where the children returning to their father at the end of the tale is their return to their former status. He needs to be there. Usually, as in the Beauty and the Beast variants, the father creates the dilemma, but then fades from the story as the jealous sisters take over.”

Melissa nods in agreement as, for dessert, she presents from her basket a peach cobbler. All conversation ceases.

One thought on “Fairy Tale of the Month: August 2018 How Idle Lars Won Himself A Princess – Part One”