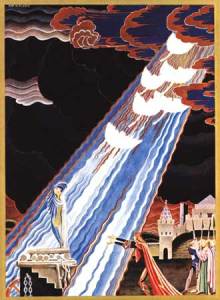 Thalia, Teddy, and I sit side by side squeezed between the arms of a comfy chair. She has labeled this arrangement as snug-as-a-bug-in-a-rug (followed by a giggle). Otherwise, we fly aloft with The Six Swans this evening.

A king, lost in a forest and entrapped by a witch, must vow to marry her daughter. His other option—starvation. The king fears his witch/queen will do harm to his children by his first marriage, and hides them away in a castle found only by a magic ball of thread that rolls out in front, leading the way to the hiding place.

Secrets cannot be kept from a witch for long. She turns the king’s six sons into swans, unaware that there is a daughter. The swans fly off, leaving their sister to wander through the forest seeking them.

After some travail, she finds a cottage in which are six beds.

“No, but you are probably thinking of The Seven Ravens or maybe The Twelve Brothers.”

In fly six swans who blow the feathers off each other. Before her stand her six brothers, but only long enough to tell her this is the house of robbers; they cannot stay; to break the spell she must spend the next six years neither speaking nor laughing, and must make six shirts for them out of starworts. They turn back into swans and fly off.

Having walked so far that she is now in an unfamiliar kingdom, the sister finds her home safely up a tree, and starts her six-year ordeal. All goes well until the king of that country’s hunting party finds her. She tries to bribe them by throwing down her necklace, girdle, garters, and finally her dress, but it is to no avail. The king claims her in marriage.

The king’s mother disapproves of her son’s choice of a bride, and spirits off the girl’s three children-one by one as they are born-claiming the girl has eaten them. All the while, the girl says nothing in her defense and weaves flowers into shirts. The king’s mother prevails, and the girl is sentenced to be burnt at the stake.

I can tell Thalia is not worried; she’s heard this ending before in The Seven Ravens.

As the flames rise, the six swans appear. She throws onto their backs the shirts made of flowers and they transform back into her brothers, who save her from the flames. Unfortunately, the youngest brother, whose shirt still missed one sleeve, had a swan’s wing for the rest of his life.

Now the sister could speak and defend herself. The children whom the mother-in-law had hidden away are brought back, and the old woman takes the sister’s place at the stake.

Evil is punished and everyone else lives happily ever after.

“But what about the little brother? He’s still got a wing.” Thalia is back to scowling.

That bothers me too.

In The Six Swans two incidents occur, both of which do nothing to forward the story. In the first of these we see the sister entering a cottage in the wood in which stand six beds. Soon her swan brothers enter, transforming for a short time into their human shape. They tell her she cannot stay in the cottage because it belongs to robbers, who will kill her if they find her. Then the brothers turn back into swans, flying out of the window, never resting on the beds.

In The Seven Ravens the brothers are lords of the Glass Mountain, where they reside. InThe Twelve Brothers the cottage is simply where they live, their unfortunate transformation taking place later on in the story. These abodes are well integrated into their stories. In The Six Swans the brothers intrude into a robbers’ den for a few minutes, then leave again?

The second gaffe comes near the end of the story, where the sister does not have quite enough time to finish the sixth shirt, and the left sleeve remains undone. We are told the youngest brother retains a swan’s wing in place of his left arm. Nothing more is made of this detail.

The editor in me wants to eliminate these clumsy elements from the story, improving it for literary consumption. The listener in me cries out, “Why are they there?”

Let me argue that these two elements—the cottage with six beds, and the youngest brother with a swan’s wing—are there because of fairy tales’ propensity for dream imagery, or more to the point, the unsophisticated, unschooled storyteller’s reliance on their own dreams to pattern their stories. They show the image through the lens of the surreal.

Because of the spell upon them, the six brothers are in an unnatural state, never truly themselves, robbed of their rest. As in the idiom of dreams we are shown six beds in a robbers’ den that the brothers approach, regain their human form only to lose it again, and never find comfort, never stay home.

The surreal lens also shows us the brother left with a swan’s wing. Like dreams, the source of the image may not be apparent, not quite a metaphor. Interpretation is left to the listener.

As I look through the surreal lens at the brother with the swan’s wing, some obvious questions cycle through my thoughts.

Is the younger brother being punished? For what fault?

Is this a failing of the sister? Did she not quite fulfill the ordeal?

Is evil being allowed one little triumph?

My questions reflect moral values. The Grimms dealt with moral values, but these surreal moments—which the Grimms did not edit out for whatever reason—do not concern themselves with morals. These images are observations. I can safely throw out my questions posed above and look elsewhere.

What I see through the surreal lens is this observation—one rare in the fairy tales’ and-everyone-lived-happily-ever-after world: The six brothers had been enchanted. They regained their human form, but a vestige of enchantment remained, embodied in the younger brother. Imagine yourself  transformed into a swan, a creature alien to your true self, yet one that flew through the air, glided on the lake’s surface. Regaining your human form, does life go back to normal? These stories never end with “And then they forgot.”

Birds of a Feather

At the lower end of Miss Cox’s garden is a pond with a resident swan, a cob I believe, who hasn’t taken a mate. A particularly solitary creature, even for a swan, he eyes me suspiciously if I wander on a garden path too near his domain. I am content to sit on the bench and view him from afar.

At the high end of the garden is a hazel tree, a favorite roost for ravens. I can make out four of them from where I sit. I am hoping for seven.

I hear the garden gate squeaking on its rusty hinges. Coming toward me is Reverend Edward Allsworthy Armstrong. I cannot be mistaken; he looks very much like the picture in his obituary: bald, bespectacled, yet with noble features, and wearing a ecclesiastical collar, denoting for him the Church of England.

We shake hands, and I point out the swan and the ravens. He take delight in them, heartfelt ornithologist that he is. Then I get to my question.

“I cannot help but notice that in fairy tales there exists a fascination for swans and ravens, one of them white and the other black, resting at either end of the color spectrum. Perhaps they represent good and evil. But I cannot imagine that the swan/raven presence is the exclusive property of fairy tales.”

“Oh, hardly!” the Reverend resets his glasses on his nose. “Swans and ravens populate legend and mythology as well. Zeus had his fondness for swans. He took the shape of a swan once for his nefarious purposes. At times, swans drew the chariot of Apollo.

“As an Ulsterman by birth, I assure you, ravens and swans figure into Celtic lore. The Irish hero Cú Chúlainin captured and killed swans, which got him into a bit of trouble. His father, Lug, was the raven god. The war-goddess Badb Catha, “Raven of Battle,” appeared to Cú Chúlainin. In Cú Chúlainin’s last and fatal battle, a raven came to rest on his shoulder.

“Swans and ravens appear elsewhere in Celtic lore, but let us not forget the wren.”

I should have guessed he’d come to this. I know the Reverend from his work Folklore of Birds, but he wrote the book on wrens, The Wren.

“Consider,” the Reverend forged ahead, “the Wren Hunt, which takes place in Celtic lands on Saint Stephen’s Day, a little before Christmas. Boys go out and beat the bushes until they capture/stun/kill a wren. Declared to be “The King,” the poor creature is then carried about ceremoniously from house to house, accompanied by youthful mummers—all boys—with an expectation for treats. In the end, the wren is buried outside of a cemetery, interred with a penny.

“But to return to swans and ravens, in Scotland they remember Cailleach, the hag who feasted on the bodies of men. She often appeared as a raven. The Welsh hero’s name, Bran, means “Raven,’ and his sister, Branwen, is the White Raven. There is more than one swan-maiden story throughout the Celtic world.”

I stop him here with my next question. “What is the significance of the swans and ravens in these stories?”

“They are simply a part of the wonder embodied in all these tales, legends, and myths.” He thinks a moment longer, then says. “Our life is impoverished if we do not cherish and cultivate the gift with which, as children, we were endowed—the gift of wonder—infinitely valuable in itself, but also to be cherished because it is the foundation of worship. The appreciation of nature leads to wonder, and wonder to worship.”

PS. The better part of the above paragraph is a quote I found in Armstrong’s obituary by W. H. Thorpe as it appeared in Ibis, Volume 121, Issue 3.