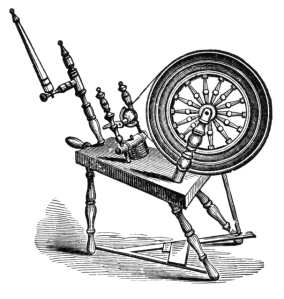 Melissa perches on Miss Cox’s bench, her hands in her lap, but her back straight, not touching the backrest. She won’t talk to or look at me, her eyes fixed on the garden gate. Her copy of The Turnip Princess lies on the wrought-iron table in front of us. I grab it as an escape from the surrounding air of doubt.

I open the book in its middle. My eyes fall upon one of its shorter stories, only a page long, The Toad Bride.

A man with three sons sets the challenge that the one who can spin the finest thread from flax will inherit his house. The elder brothers set about their task in a logical manner, but the younger, foolish brother “…takes the flax and runs with the wind…” until he gets mired in mud. A toad takes his flax, sets him free, and tells him to come back later.

When the foolish brother returns to the toad, he is given fine thread and in addition told to prepare for a marriage, with the injunction that he places a bridal gown and veil on the altar.

The youngest son wins the contest, and everyone assembles for his wedding. The groom is at the altar, the bells are ringing, but there is no bride.

A toad hops into the church, crawls into the bridal gown, and transforms into a beautiful woman. We soon find out that when the toad helped the young man by giving him the fine thread, she broke a witch’s curse. Of course they marry and live happily.

I glance at Melissa, who remains statue-still. If I were to cast us into this story, would I or Melissa be the toad?

Although I am hardly young, I can relate to the foolish part of the main character. Do I run with the wind until mired in mud? Metaphorically, I think I do. I wander alone in the Magic Forest and throw peanuts to a nixie. I do that at my peril.

That would make Melissa the magical toad. They are both feminine, but there the parallel ends. Melissa is not bewitched. Enchanted beings possess a certain amount of magic, and Melissa only now faces the existence of magic in the mode of can-this-be-true?

Rather, I must be the magical toad in this story. Magic and I are old friends. I won’t say I possess magic, but I do walk through magic. I see it all around me. Vaporous at times, but there nonetheless. I am the one bewitched—though willingly, not under a curse.

Can I cast Melissa as a foolish youth? Well, she is young, much younger than I. Foolish? She is sitting here in Miss Cox’s garden with me. “Foolish” is an applicable adjective.

Melissa takes in a breath and stirs. Entering the garden is a stately gentleman dressed in a tailored, black suit, though of a cut I do not recognize. His proud countenance is that of a man of a royal court. Melissa and I both rise. 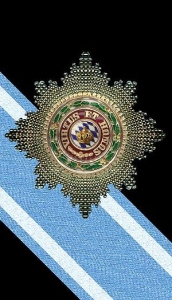 Bavarian Order of the Crown

There are people who radiate charm. Is it Schönwerth’s pleasant, confident smile? The ease of his stride as he approaches us? The tone of his voice?

Oh, no. The language barrier. I haven’t thought of that since my awkward interview with Hans Christian Andersen.

I should have guessed Melissa would be good to the task. They settle onto the wrought-iron bench and immediately fall into an intense discussion. I find myself standing beside them, the bench holding only two. It is best that I take a stroll around the garden even though I am still hobbling at bit.

An interesting fellow, Schönwerth. Educated in both the arts and law, he held the position of private secretary to the crown prince Maximilian of Bavaria. Schönwerth’s duties included the management the prince’s wealth, a well-placed trust. During the upheaval of the 1848 revolt, Schönwerth, dressed as a laborer, wheeled three million thaler’s worth of cash and securities to safety in a handcart.

But Schönwerth had another dimension and passion, that of German folklore, specifically that of the Upper Palatinate. Erika Eichenseer’s recent translation of some of the fairy tales he collected has brought that piece of his collection to light, but he also collected and recorded nursery rhymes, games, songs, proverbs, customs, and made observations on the peasants’ everyday lives.

He went about this in a structured, scientific manner, leading the way toward modern folklore collecting techniques. He was Inspired by the Grimms and corresponded with them starting in 1858. Jacob Grimm wrote that Schönwerth was the obvious heir to their work.

Schönwerth showed an unusual talent for drawing out information from subjects he interviewed without appearing to pry and with little more inducement than coffee and cigars. What he collected was absolutely voluminous.

To his credit as a folklorist, Schönwerth did not refine the stories he collected to suit an audience. He recorded what he heard. The downside of that practice meant his published works never drew much popular attention during his life.

Through the efforts of Erika Eichenseer, there is a rising interest in Schönwerth’s work. At the University of Regensburg, where the collection is housed, research continues to unearth details hidden in the unsorted heaps of paper that make up his legacy.

Also, there is now a Schönwerth Fairytale Path near Regensburg, which presents eight nature tales illustrated by local artists and which I hear has been very well received by the public. Perhaps the long overdue notice has finally come to Franz Von Schönwerth.

I look across the garden to where the two of them are sitting knee to knee. I think I’ll stroll farther along.

As I amble about, an errant thought comes to me. The task proposed by the father does not conform to the typical challenge. In The Three Feathers, which this story resembles, the king sends his sons out to find the best of something, which he ends up doing three times because of the discontented elder brothers. In The Toad Bride, the brothers compete to make the finest linen thread, which is women’s work. The tale glosses over the fact that he youngest has help and doesn’t do it himself. The contest is a foil, simply to move the story forward. Fairness is not important.

I wander down toward the pond in Miss Cox’s garden and continue to occupy my thoughts with The Toad Bride. I can easily find common elements this story shares with others of its ilk. The three brothers, with the youngest being the simpleton and victor in the contest proposed by the father; the animal helper who is really a human cursed by a witch to appear in animal form; and the concluding marriage, of course.

Although Schönwerth corresponded with the Grimms, and each had much respect for the other, he did not follow the Grimms’ habit of polishing the stories. The echo of the storyteller’s mindset comes through Schönwerth’s transcriptions more clearly than it does in those tales that went through the Grimm filter.

In the Grimms’ hands, the three brothers motif appears having the youngest being a simpleton, yet gentle, thoughtful, and kind. The two elder brothers discredit themselves by being rude, jealous, and  greedy. In some cases the simpleton is shown to be a lot smarter than first credited.

Not so with the teller of The Toad Bride. Here the elder brothers set about their task, and we hear no more of them for good or for ill. The younger runs about willy-nilly (I see him waving his share of the flax in the air) until he is trapped in a mud pit and needs to be rescued. The only thing he does that comes close to making him worthy is to follow the toad’s simple instructions. The tale has the feel of The Prodigal Son, void of Grimm-added character justifications.

I hear Melissa’s laughter ringing from the upper part of the garden. I know now she will let me back into her bookstore. I feel myself breathing easier.

Also, unlike Grimm, the magical helper is a female. Usually for Grimm, the helper is not only a male, but also a prince. In The Toad Bride the toad transforms into a beautiful woman with no mention of royal blood. That is not to say there are no female magical helpers in Grimm—a notable exception being The Three Feathers.

The youngest brother and the beautiful woman get married; a more traditional, happy ending I cannot think of. The striking image comes when the toad hops into the church and crawls into the wedding dress. I think this picture contains the tale’s meaning. She broke the curse when she helped the young man, but her transformation does not occur until the wedding. The teller that Schönwerth sat with and transcribed this tale may well have been thinking of the generative power of marriage as the tale’s message.

By the time I return to the upper garden, their goodbys have been said. I see Schönwerth disappearing through the garden gate. Melissa throws her arms around me in a hug.

“Thank you,” she says into my ear, “for showing me the garden and letting me into your world.”

I am the magical toad of this story, and happy about it.